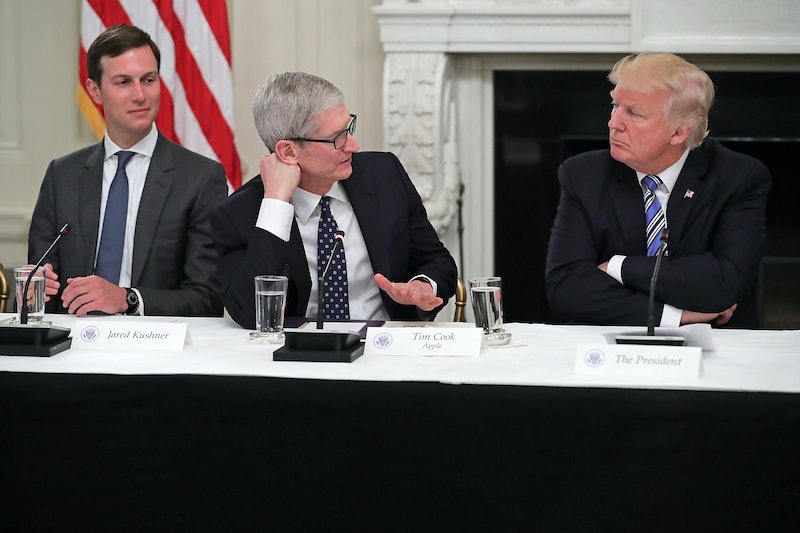 When Apple CEO Tim Cook changed his surname on Twitter to his company's logo earlier this week it wasn't happenstance. Rather, it was a nod to the time President Donald Trump had incorrectly called him "Tim Apple" during a White House meeting. But while Trump's flub sparked a flood of "Tim Apple" jokes, the president doesn't appear to be laughing. In the span of four days, Trump has denied, conceded, and defended his "Tim Apple" slip up. Now, in his latest remark about the incident, Trump has claimed it saved time and words to call the Apple CEO "Tim Apple" instead of Tim Cook.

"At a recent round table meeting of business executives, & long after formally introducing Tim Cook of Apple, I quickly referred to Tim + Apple as Tim/Apple as an easy way to save time & words," the president tweeted Monday. "The Fake News was disparagingly all over this, & it became yet another bad Trump story!"

Trump's Monday tweet comes three days after he'd reportedly denied the incident to Republican donors at Mar-a-Lago. According to Axios, Trump told donors Friday that reports he'd called Cook "Tim Apple" during an American Workforce Policy Advisory Board meeting at the White House on Wednesday were "fake news." Instead, he claimed he'd said "Tim Cook, Apple" but was perhaps speaking fast and a bit quiet in his pronunciation of "Cook."

One of the Republican donors present for Trump's denial at Mar-a-Lago reportedly told Axios they found it strange that the president would "lie" about something so meaningless. "I just thought, why would you lie about that," Axios' Jonathan Swan reported they said. "It doesn't even matter!"

Of course, the problem with Trump's denial was that his "Tim Apple" remark was caught on camera — and he's clearly not saying "Cook" anywhere in there. "You've really put a big investment in our country," Trump can be heard to say in video footage of the meeting. "We appreciate it very much, Tim Apple."

Although Cook didn't move to correct or react to the president's mistake in Wednesday's meeting, he later changed his surname to the Apple logo on Twitter.

But according to The Daily Show, Trump hasn't just flubbed people's names — he's confused the names of cities he's visited as well. In one incident highlighted by The Daily Show, the president repeatedly referred to Paradise, California, a town leveled by a devastating wildfire in 2018, as "Pleasure."

Although it's unclear why Trump would think he could convince people that what they saw in a video wasn't what happened, one thing is clear — the president doesn't appreciate being the butt of even good-humored jokes.