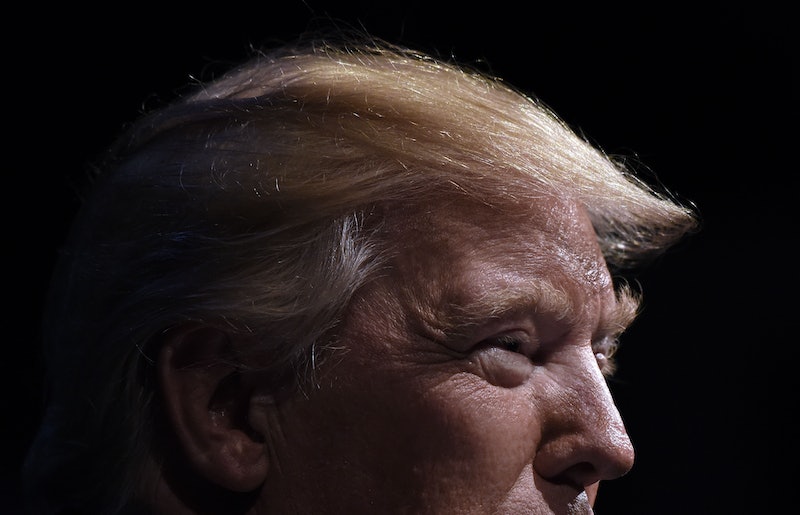 According to reports on Friday afternoon, less than one day removed from former FBI director James Comey's testimony before the Senate Intelligence Committee, President Donald Trump made some cryptic remarks about James Comey tapes.

Specifically, Trump was asked about his reaction to Comey's testimony during a joint press conference with Romanian president Klaus Iohannis by Dave Boyer of The Washington Times. The morning after the hearing, Trump tweeted that he felt "total and complete vindication," despite the fact that Comey repeatedly called him a liar and laid out a case, although he opted not to argue as such himself, that could be interpreted as obstruction of justice.

Comey also voiced hope that there were tapes of he and Trump's meetings, a reference to Trump's infamous, threatening tweet implying he might have recorded some of their conversations.

"Lordy, I hope there are tapes," Comey said.

In responding to Boyer's question, Trump again attacked Comey as a "leaker," and insisted the hearing showed "no collusion, no obstruction" (both of which are decidedly false claims). But he also quickly and somewhat strangely commented on the issue of the tapes, declining to answer directly for now and suggesting that he'd address it "in the near future."

Well, I'll tell you about [the tapes] maybe sometime in the very near future. But in the meantime, no collusion, no obstruction, he's a leaker, but we want to get back to running our great country, jobs, trade deficits, we want them to disappear fast. North Korea, big problem, the Middle East, big problem. So that's what I am focused on, that's what I have been focused on. But yesterday showed no collusion, no obstruction, we are doing really well ... frankly, James Comey confirmed a lot of what I said, and some of the things that he said just weren't true. Thank you very much.

According to CNN's MJ Lee, Trump again lightly addressed the matter of the tapes later, suggesting people (presumably he meant members of the media) would be "disappointed" when they learned the answer.

That's far from the only headline news to emerge from his press conference, however. He also stated clearly and plainly that he'd be willing to testify as to his conversations with Comey under oath, and thus, under penalty of perjury. His words: "100 percent."

Of course, you can be forgiven for not taking his word for it. It's hard to believe that Trump's attorneys would ever encourage him to go under oath, thus exposing himself to the threat of perjury if he makes a false statement. As such, and given his track record of threatening legal actions while none actually materialize, you probably shouldn't assume this will ever happen ― although nobody is privy to Trump's legal and political strategy but he and his attorneys, obviously.

This much, however, is clear: both by alluding to the tapes and insisting he'd testify, Trump's presser has generated more problems for him, more nagging questions he and his staffers are going to be asked over and over again. Where it all leads, however, is too soon to say.