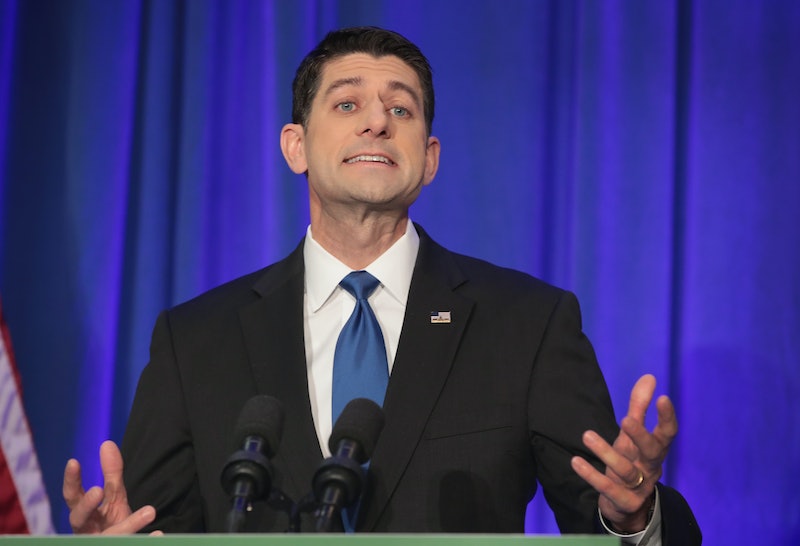 I would never stoop so low as to compare Donald Trump’s fourth week in office to, say, a large refuse receptacle that has somehow caught on fire, but it’s been hard to look away from the non-stop flare-ups coming from 1600 Pennsylvania avenue all week: Flynn’s resignation, Puzder’s withdrawal, Trump’s … whatever Thursday’s presser was. But while we’ve all been agog at the goings on at the White House, down the street at the U.S. Capitol building, Congressional Republicans have been busy doing all sorts of things that will have a real and substantial impact on our country. The takeaway: we can’t take our eyes off the 115th Congress for one second.

This is no easy feat, especially when you compare it with Trump’s real-time fights with reporters, his dramatic executive order signings, and all the tweeting (oh, the tweeting!), it’s hard to focus on the slow, tedious proceedings of the House and Senate. But Republicans have been hard at work — even just this week — implementing their agenda as the Executive has been taking up most of the media spotlight. Measures from all over the conservative agenda have been pushed through, and with President Trump sitting in the Oval Office, pen ready, there’s little that can be done to stop them.

Consider this quick round-up of what Congress has been up to this week:

The Senate confirmed another handful of Trump's cabinet appointments, including the problematic pick for the Environmental Protection Agency, Scott Pruitt.

The House approved a resolution that would once again make it legal for people to shoot wolves from helicopters.

The House also approved a measure that would give states the power to withhold funding from Planned Parenthood and other similar organizations, even if the funding has nothing to do with abortion or family planning.

In another roll-back of an Obama-era rule, the House passed a resolution that would allow states to conduct drug tests on people who are on unemployment insurance.

And in case you were wondering, the last three of those all happened on Thursday, while the media was busy covering Trump’s epic, headline-dominating press conference.

I don’t want to insinuate for a second that Trump isn’t potentially dangerous, and that his shenanigans don’t deserve close, careful scrutiny, not just by reporters, but by regular citizens, too. But, just as we scramble to remind ourselves how the Electoral College works every four years, we owe it to ourselves to be mindful of how our government works.

Remember: the president is powerful, but Congress is too, and you've got to keep your eye on moe than the executive branch.