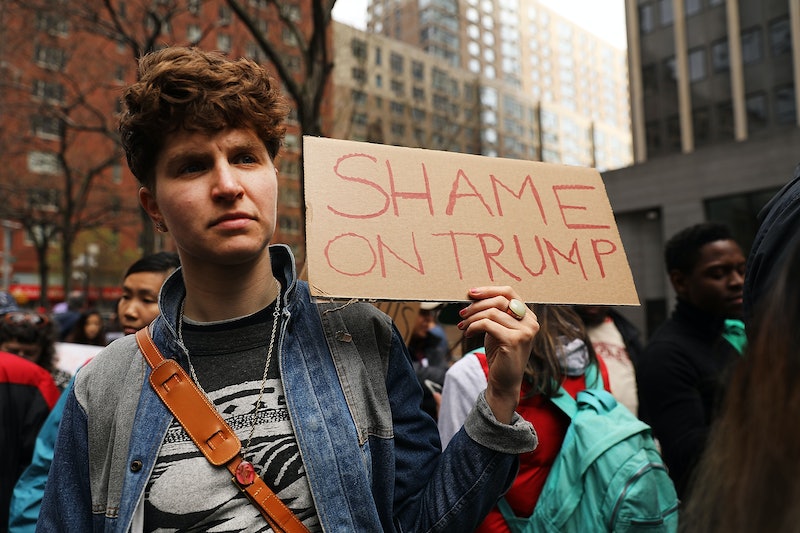 President Donald Trump's first 100 days ended not with a bang, but with a whimper. The normalization we all feared appears to be upon us, and though Trump's been president for 100 days, we must keep resisting to not only keep up the momentum of the movement, but to also push back against the normalization of his specific breed of authoritarianism. More than anything else, resistance must remain fierce so our elected officials know that you want Trump to be impeached as soon as possible.

A president's first 100 days in office are something of a litmus test for how they will govern for the duration of their term — and by all accounts, Trump's first 100 days paint a grim portrait of what has already become of our nation after Nov. 8, 2016. His first week alone demonstrated just how serious he is about fulfilling campaign promises like his proposed border wall and toughened immigration standards, and the newly emboldened Republican Congress set about achieving their anti-choice agenda that first week, too.

But as Republicans in the White House and Congress scrambled to achieve their ends, so, too, did the resistance. The women's marches around the world on Trump's first day in office were nothing short of miraculous, and the swiftly organized protests in response to both of the president's failed travel bans proved that Americans weren't just watching, but were willing to act in defiance of President Trump.

For all the noise the resistance has made — from crashing Congress' phones to striking en masse on International Women's Day — the inevitable quieting down of opposition seems to have begun. Congressional opposition from the Democrats has achieved some victories, but the big pre-inauguration talk of impeachment has mostly died down.

It's because many Democrats have seemingly maintained a fairly weak stance on impeachment, perhaps more than any other reason, that the resistance must continue to push for Trump's ouster. Whether it's rallies in opposition to specific policies (like those after the immigration ban), continued calls to Congress, or other forms of activism, the resistance must not rest until Trump is out of office.

Looking back on Trump's first 100 days (and the massive protests between the election and his inauguration), it's good to feel a sense of pride in what this newfound resistance has achieved. We helped block two unfair (and potentially unconstitutional) immigration bans, killed "Trumpcare" in its tracks, kept up the pressure on Michael Flynn until he resigned, and made our congressmembers work for our votes by calling incessantly about Trump's cabinet nominees.

It's precisely that excellent track record that makes the need to keep up the resistance so important. We must not only resist Trump as president. We must resist every facet of "Trumpism" until it drives him out of office, and we must not rest until that day finally comes.