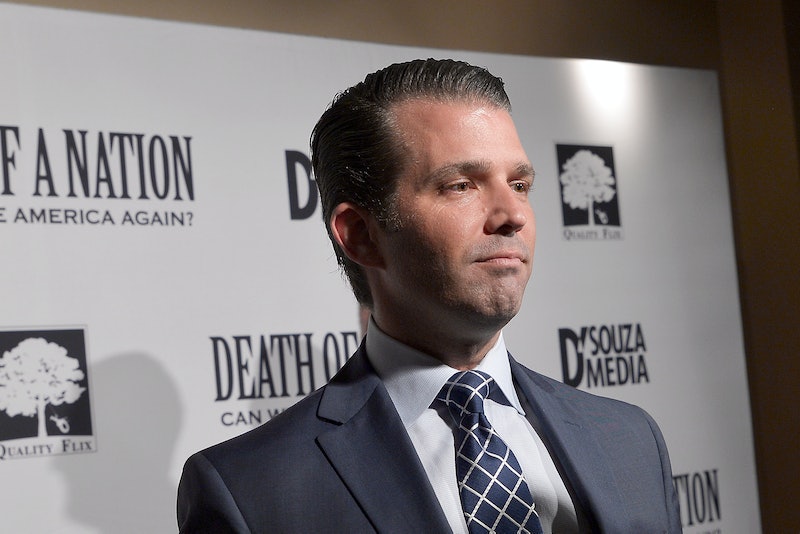 In the new film Death of a Nation, far-right author Dinesh D'Souza argues that Adolf Hitler was actually a liberal and the American left is perpetuating Nazi ideology. The film premiered in Washington D.C. on Thursday, and at the screening, Donald Trump Jr. claimed the Democratic Party's platform is "awfully similar" to that of the Nazi Party in the 1930s, and praised D'Souza and the film.

In Death of a Nation, D'Souza draws comparisons between President Trump and Abraham Lincoln, and argues that the redistributive economic policies embraced by modern-day Democrats were the underpinning of Nazi Party ideology in the 1930s. The Nazi Party, of course, is most famous for invading other countries and committing genocide, which the Democratic Party has not done.

Nevertheless, Trump Jr. gave a glowing review to the film, telling One American News that America's youth is incorrectly being taught that Nazi policies were far-right in nature.

“When you look at the movie, you’ll see that there is a very distinct and clear difference between what actually happened and what is being sold to our youth today,” he said. “You see the Nazi platform in the early 1930s and what was actually put out there, and you look at it, compared to the DNC platform of today, you’re saying, ‘Man, those things are awfully similar’ to a point where it’s actually scary.”

In Death of a Nation, D'Souza quotes from the official Nazi Party platform, reciting policies such as "money lenders and profiteers punished by death," "state control of media and the press," "seizure of land without compensation" and "state control of religious expression." He then claims that the Nazi policy plank "reads like something jointly written by Elizabeth Warren and Bernie Sanders," though it's worth stressing that neither Warren nor Sanders have actually endorsed any of those policies.

Death of a Nation currently has a zero percent rating on Rotten Tomatoes. Variety's Owen Gleiberman writes in his review that D'Souza "is no longer preaching to the choir; he’s preaching to the mentally unsound," while the AV Club accuses the film of being packed with "falsehoods, rhetorical sleights of hand, goalpost shifting, and general bad-faith arguments."

D'Souza has covered this territory before, most notably in his 2017 book The Big Lie: Exposing The Nazi Roots of The American Left. In a review of that book, conservative columnist Ross Douthat wrote that D'Souza "really does attempt to pin just about every crime in our nation’s history, plus certain famous German crimes as well, on the left and Democrats (categories used interchangeably and ahistorically throughout)."

In an interview with the Washington Post, D'Souza admitted that his new film isn't likely to convert anybody who doesn't already agree with him.

“The movie would appeal immensely to people who really want to know what’s going on and know nothing about it,” D’Souza told the Post. “I would love to reach the middle-of-the-road guy, the guy on the fence. But I also am realistic enough to recognize that it’s going to be predominantly Republicans and conservatives who come to the film.”

In addition to his filmmaking and writing, D'Souza is notable for having pleaded guilty to election fraud in 2014. He served eight months in a community confinement center and was given two years probation, but Trump gave D'Souza a full pardon in June.