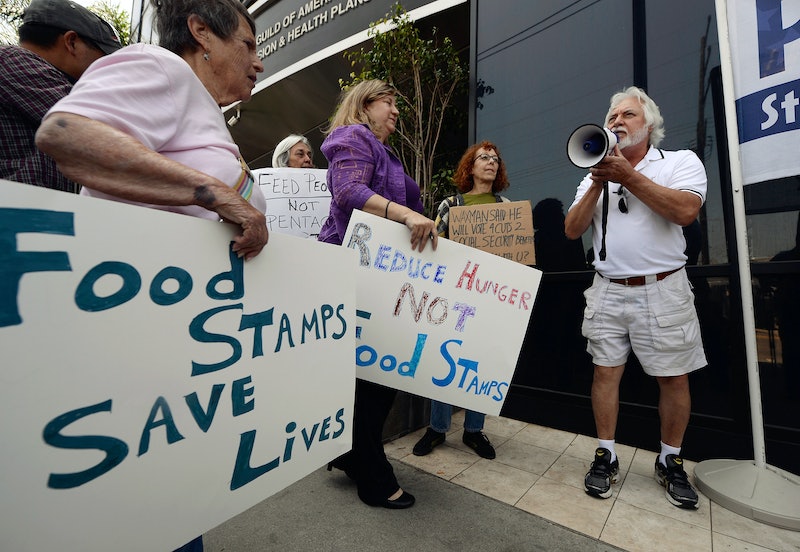 In the coming years, families living near the poverty line could have a harder time getting access to federal benefits. The Trump administration suggested the poverty line should be calculated differently on Monday, according to The New York Times. The proposed change seems small, when you look at the projected differences in dollars — but it could actually negatively impact millions of Americans, stripping them of benefits.

Per CNN, the Office of Management and Budget released a regulatory filing on Monday, which proposed a change to the way officials determine the annual increase to the poverty line each year. As it stands, the decision is made via the consumer price index, which is a measure of inflation. The Trump administration wants to change this calculation by using a different measure of inflation called "chained-CPI", which grows more slowly, because it operates on an assumption that consumers buy cheaper items when prices rise.

As The New York Times notes, using a lower estimate of the inflation rate would make it more likely for the poverty level to rise at an even slower rate. In practice, this means that it would be harder for families to qualify for benefits like food assistance or Medicaid, because the government could set the poverty line at an even lower level than where it stands now.

Douglas Holtz-Eakin, president of the American Action Forum and former official in both Bush administrations, provided CNN with real-life numbers to explain how the change might look: if chained-CPI were used for the last five years, then the 2018 federal poverty level would be $12,113 for an individual, rather than the $12,140 that it was. Again, it's not so much about the dollar disparity, but about how that disparity could potentially cut millions of people off from benefits or otherwise affect low-income Americans: in 2017, approximately 39 million people were living at or below the poverty line, per data collected from the U.S. Census Bureau.

To be clear, the Trump administration is far from the only one to consider this change. The Bush administrations, as well as the Obama administration, also considered this switch at various points. But due to significant opposition, the change has never taken place.

To CNN, Melissa Boteach, vice president for income security, child care, and early learning for the National Women's Law Center, said, "The Trump administration is floating a proposal that would unilaterally strip working class people of Medicaid, nutrition assistance and other basic support by pretending that our definition of poverty is too generous."

Another opponent to the proposal called it "mathematical gaslighting." Rebecca Vallas, vice president of the Poverty to Prosperity Program at the Center for American Progress, said in part to The Washington Post, “Instead of actually doing anything to cut poverty in America, Trump is trying to fudge the numbers to artificially ‘reduce’ the U.S. poverty rate."

The proposed change is now in a public comment period. If the idea of changing the poverty level calculation is something that bothers you, or something that you want to learn more about, you can read up on the pros and cons of the debate, and then submit a written comment within 45 days of the proposal's publication.

More like this
How To Fight For Reproductive Rights, Based On How Much Time You Have
By Courtney Young
LGBT+ Men Fleeing Afghanistan Were Denied Asylum By The Home Office, New Findings Show
By Sam Ramsden
Celebrities & President Biden Are Enraged By The Leaked Roe v. Wade Decision
By Alyssa Lapid
What Is Barack Obama’s Net Worth? He Makes *Way* More Now As An Ex-President
By Hugh McIntyre
Get Even More From Bustle — Sign Up For The Newsletter