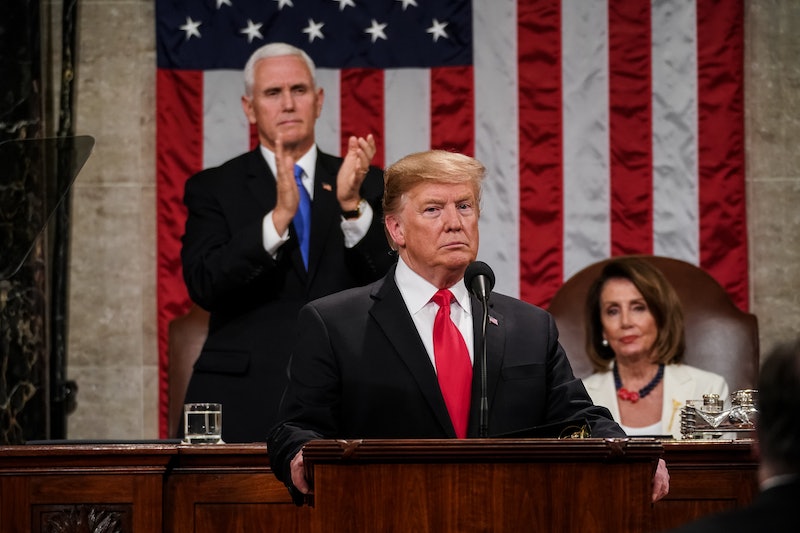 On Tuesday, the president of the United States delivered his annual State of the Union (SOTU) address, touching upon a number of contentious issues and recent events. Among the subjects he broached were reproductive rights, at which point President Donald Trump mischaracterized "late-term" abortion bills that have been passed or debated in two different states in the last two weeks.

He pointed to New York, which passed its long-anticipated Reproductive Health Act (RHA), and Virginia, whose legislature recently debated a proposed series of amendments to its current abortion regulations. Both bills aimed to make it less difficult for women to receive third trimester abortion care.

"Lawmakers in New York cheered with delight upon the passage of legislation that would allow a baby to be ripped from the mother’s womb moments before birth," Trump said of the RHA. "These are living, feeling, beautiful, babies who will never get the chance to share their love and dreams with the world."

In describing the RHA this way, Trump made it sound as though women could electively undergo third trimester abortions up until they go into labor. This is not the case. Under the RHA, a woman may only terminate her pregnancy after 24 weeks gestation if her life or health is in danger, or else if the fetus is no longer viable. Previously, such abortion procedures were only allowed if the woman would likely die if she continued her pregnancy to term.

Trump then zeroed in on recent comments made by Virginia Gov. Ralph Northam, regarding his state's proposed abortion legislation. "And then," Trump said, "we had the case of the Governor of Virginia, where he stated he would execute a baby after birth. To defend the dignity of every person, I am asking Congress to pass legislation to prohibit the late-term abortion of children who can feel pain in the mother’s womb."

Northam, who is also a pediatrician, did not say anything about "executing" babies. While speaking about his state's proposed piece of legislation on the WTOP radio station recently, he said that a highly at-risk fetus actively being birthed would be delivered, if it was possible to do so. He then added that the "infant would be resuscitated if that's what the mother and the family desired, and then a discussion would ensue between the physicians and the mother," which prompted outrage from various anti-choice figures, and particularly Republicans.

No woman seeks a third trimester abortion except in the case of tragic or difficult circumstances, such as a nonviable pregnancy or in the event of severe fetal abnormalities, and the governor’s comments were limited to the actions physicians would take in the event that a woman in those circumstances went into labor.

Trump's comments suggested that women take the decision to undergo a third trimester abortion lightly. In fact, such abortions are rare. They are typically performed in extreme circumstances, like when a woman's health or life is at risk, or when there is a severe fetal abnormality. And neither the RHA nor Virginia's proposed bill allowed for them to take place on a purely elective basis.

Abortion regulations directly — and immediately — impact women's health, as well as their capacities to make their own medical decisions. When discussing procedures of such importance, it's important to make sure you have all of the facts.