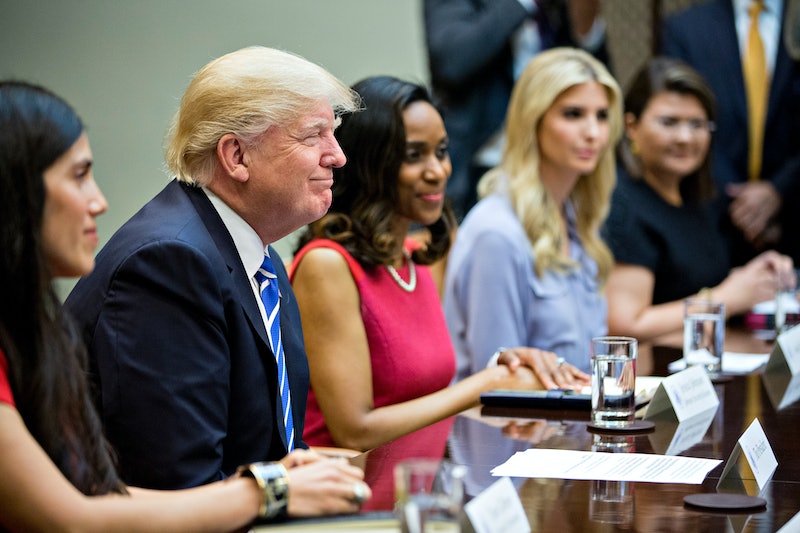 When it comes to women's rights, President Donald Trump's stances are often not quite in sync. Though he claimed to be pro-woman, the infamous Access Hollywood tape revealed Trump bragging about grabbing women without permission (something he's denied acting upon). He's declared his allegiance to supporting women, yet his administration has discussed cutting maternity care from certain health care plans and defunding Planned Parenthood.

Trump's history on equal pay is just as murky. In fact, Trump once said that equal pay gets away from the American Dream.

On Equal Pay Day, this isn't an encouraging sentiment. Trump has also said that he believes in equal pay for equal work, but his other comments make believing him a little difficult. During a November 2015 interview with a Des Moines, Iowa, news station, Trump explained:

Here is the problem. If you start getting involved with government on "this one gets this pay and this one gets that pay," and then you say — "Where does it all start?" Because you could have a woman that's much better than a man, or you could have a woman that's not as good as man, if you sort of say, "Everybody gets equal pay," you get away from the whole American Dream. You get away from capitalism in a sense.

I can tell you, that I have women, honestly that are just, in many cases, they're better than men, and I pay them more than men. And to a certain extent, people have to go out there, they have to fight for themselves ... I don't know if people agree with me, once you get where everybody gets the same, I mean, you're into a socialistic society.

So, there are a few problems with this view. Pay based on performance sounds fair in theory, however, Trump's capitalistic view of pay means that people need to be fighting for their own pay, which places the responsibility of their achievement of getting fair pay or not on their own shoulders, regardless of outside influences.

If you look closer at what Trump actually said when he went on MSNBC's Morning Joe in August 2015 and claimed he believed in equal pay for equal work, it's definitely tempered rather than a whole-hearted endorsement.

Scarborough: There you go.

Trump: ...But it's very hard to say what is the same job. It's a very, very tricky question. And I talked about competition with other places and other parts of the world, Mika; this is one of the things that we have to look at very strongly.

Basically, Trump summed up his view of equal pay as a "very, very tricky question."

Fair pay is a generally simple concept that reasons that women and men with similar experience levels and the same job title should receive the same compensation for that job. It's not that difficult of a thing to support. To not agree with it, and to say that it is getting away from the American Dream or tricky to figure out is pretty unreasonable.

It doesn't help that Trump recently signed an executive order that rolls back protections for women in the workplace. Given his past examples, I wouldn't expect Trump to celebrate Equal Pay Day with any new legislation aimed at helping women.