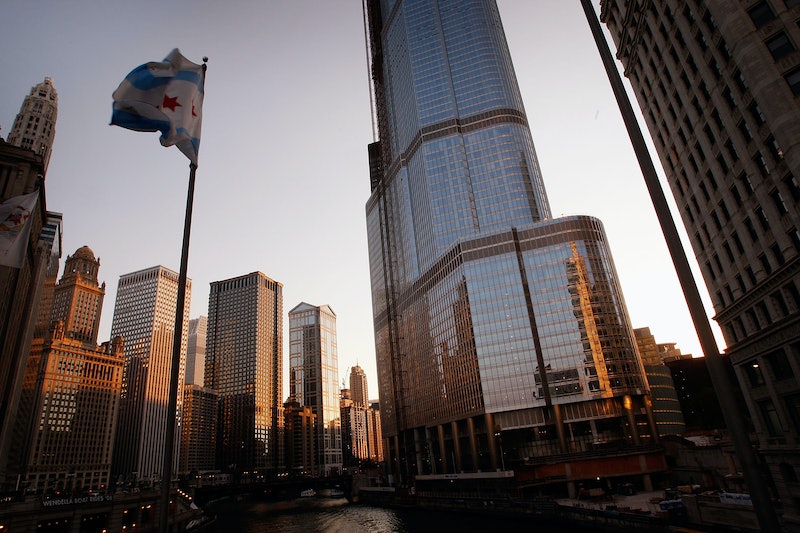 According to a new report from The New York Times, in 1980, Donald Trump employed approximately 200 undocumented Polish workers to help demolish a midtown Manhattan property, clearing the way for the construction of his eponymous Trump Tower. And those construction workers apparently had to turn to the legal system to achieve remuneration ― Trump paid an approximately $1 million labor settlement regarding his treatment of the Polish workers, who reportedly earned just $4 per hour.

For what it's worth, in 1980, $4 per hour still outpaced the federal minimum wage by 90 cents, and adjusted for inflation, that amounts to more than $9 per hour, higher than the $7.25 minimum wage the U.S. has today. That said, however, the undocumented (and therefore vulnerable) workers Trump hired were performing jobs that would've otherwise gone to unionized construction workers, and according to The New York Times' report, they were making less than half of what their union equivalents would have.

Some of them, furthermore, were reportedly not paid on time, or at all, while working 12 hour shifts in unsafe conditions, with no hard hats, gloves, or other safety equipment. They were also demolishing a structure ― the Bonwit Teller building ― that was laden with asbestos, and thus worked through exposure to the dangerous substance. Prolonged inhalation of asbestos can cause lung cancer and mesothelioma.

It's perhaps an unsurprising report given Trump's long history of lawsuits. An analysis by USA Today prior to his election found that he'd been embroiled in about 3,500 legal actions throughout his career in the private sector, so it doesn't come as a huge surprise that this happened relating to the construction of Trump Tower.

The report also emphasizes that while Trump denied ever noticing the undocumented Polish laborers, one witness testified to quite the opposite. Zbignew Goryn, a foreman overseeing the project, reportedly testified that Trump not only noticed the non-union, undocumented laborers, but commented on what "hard workers" they were:

He liked the way the men were working on 57th Street. He said, "Those Polish guys are good, hard workers."

One Polish worker interviewed by the Times in 1998, Wojciech Kozak, told the paper at the time about the grueling and ultimately dangerous experience. Now, speaking to the Times once again at 75 years old, he recalled working without a mask, unaware of the impact that asbestos inhalation can have on the human body:

Because I worked with an acetylene torch, I got $5 an hour. We worked without masks, Nobody knew what asbestos was. I was an immigrant. I worked very hard.

Trump has long boasted that he doesn't settle lawsuits, because that encourages more people to sue. In this case, however, he ponied up a reported $1,375,000 to settle the dispute in 1998, after approximately 15 years of litigation, one of many times he's broken his claimed "never settle" ethos.

Notably, throughout his presidential campaign, Trump repeatedly called for stricter immigration controls, and for companies to hire American workers, despite his own history of relying on foreign worker visas to staff some of his businesses. This contradiction has continued into his presidency, as he filed for 70 foreign worker visas to staff his Mar-a-Lago estate in Florida this year. Trump has defended such practices on the grounds that it's hard to find suitable workers, and that he's allowed to do it.

The Bonwit Teller building was ultimately knocked down in 1980, and Trump Tower was erected in its place, completed in 1983. The skyscraper has for decades been Trump's foremost base of operations, although he now spends far more of his time in Washington, D.C. at the White House, or at other properties like Mar-a-Lago, or his many golf courses.