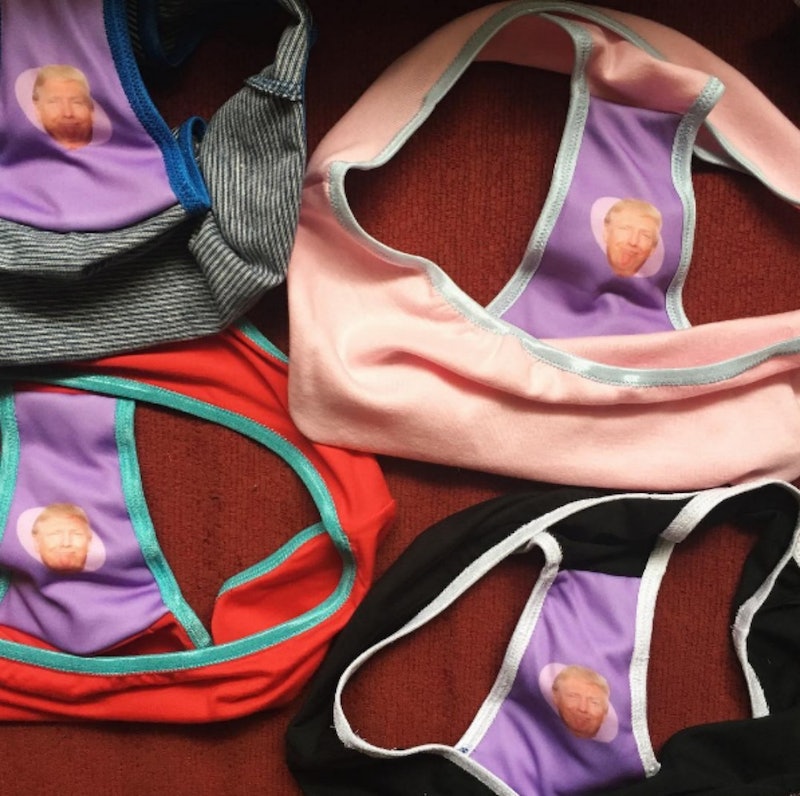 As inauguration day approaches, has your uterus been longing to voice its righteous indignation? Well, in case you forgot, it can, at least symbolically, with these Donald Trump period panties. They're not new, but they are especially relevant. Feminist underwear maker @cutefruitundies has put Trump, and other Republican anti-choice politicians right where they're so desperate to be: all up in our reproductive parts. Next time cramps thunder through your body, it just might soften the blow to know that you're currently bleeding on Trump's face. Or Pence. Both satisfying.

There's no period shame here, either. The Trump period panties are a statement about reproductive choice, not a statement about the grossness of periods, because let's be real, periods are just a part of life. They're not a punishment. They might feel like it sometimes, but they're natural and healthy. Having a politician between your legs is not so healthy, especially when so many people depend on conservative target Planned Parenthood for life-saving cancer screenings and medical care. And, as the old feminist classic goes, "the personal is political," which means the things that affect our daily lives, like the health of our reproductive organs, are just as important to fight for as any other issue on any other political agenda. So bleed away, folks, and enjoy every satisfying minute of it.

Behold the Trump period panties in all their glory. Bright, colorful, and with that smug face right in the center.

Your pal John Kasich is along for the ride, as well. Imagine how much your gyno would LOL if you rocked these at your next exam, especially if it was at Planned Parenthood!

These panties are equal opportunity. Here's the Sarah Palin Blood Dumpster set with an attachable heat pack. According to period panties creator Sarah Palatnik on the brand's blog, a blood dumpster is "a politician who has tried in the past or who is currently trying to pass legislation that hinders women’s reproductive rights." I wonder if she can see Russia from down there?

Here is a shot of the Cruz period panties in action. He looks pretty happy, TBH. I bet he would look happier if he supported reproductive choice and access for all. Having control off one's own body tends to cheer people up. Of course, he would know, as nobody is trying to actively regulate his body.

Admit it, though. Your real beef is with The Donald himself. I get it. That's why it brings me great jot to see him here, just waiting to watch over the products of conception, (and our reproductive systems in general) just like his administration has vowed (and has a track record) of doing. I hope mine get here before he's sworn in.

Oh, and just for good measure, the company donates $3 of each sale to Planned Parenthood. Win-win. If you want these, don't wait. They're sure to sell out. In fact, sometimes the site can't even handle all the traffic (which I know from personal experience).