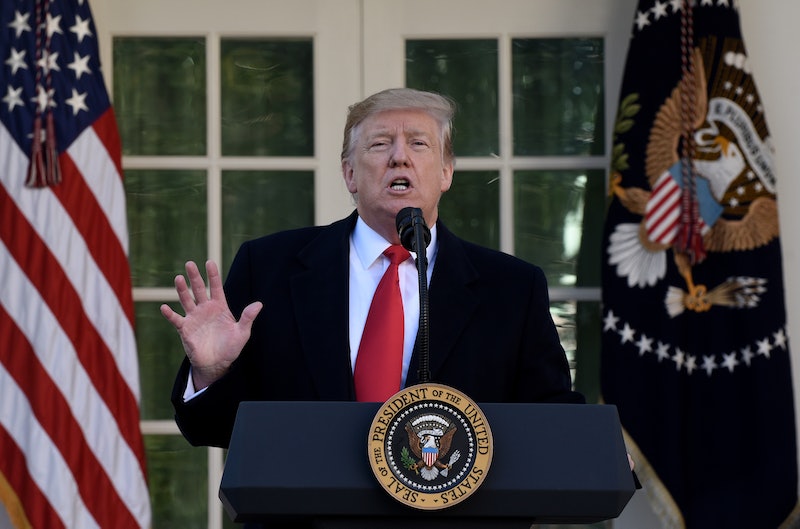 In an interview about the Democratic presidential primary, President Trump pronounced Kamala Harris' name incorrectly, the New York Times reports. The California senator pronounces her first name such that it sounds like "comma-la," but the president mispronounced it "Kameela," according to the Times.

“I would say the best opening so far would be Kamala Harris,” Trump said, using the wrong pronunciation. "I would say in terms of the opening act, I would say, would be her...A better crowd — better crowd, better enthusiasm.” Bustle has reached out to Harris' office and the White House for comment.

Harris announced her campaign for president on Sunday at a 20,000-person campaign rally in Oakland, and her launch was praised in national and local media for its professionalism, eye-popping turnout and a town hall in Iowa later in the week that, according to CNN, was the most-watched single-candidate town hall meeting in cable new history.

Harris, however, has come under heightened scrutiny since launching her campaign. Conservatives pounced on her for saying that she supports Medicare-for-all and is fine with abolishing private health insurance altogether ("Let's eliminate that," she said), while social progressives have criticized numerous her prosecutorial career and argued that, as San Francisco's district attorney and California's attorney general, she was not nearly as progressive as she has claimed to be.

Trump told the Times that in general, he feels the Democratic Party has "really drifted far left," and that despite his praise for Harris, "some of the others were very flat."

“I do think Elizabeth Warren’s been hurt very badly with the Pocahontas trap,” Trump said, referring to the derisive nickname he's given the Massachusetts senator and presidential candidate. “I think she’s been hurt badly. I may be wrong, but I think that was a big part of her credibility, and now all of a sudden it’s gone.”

Trump also addressed the ongoing Congressional negotiations around his request for a U.S.-Mexico border wall. Calling the talks "a waste of time," the president said that he has "set the stage for doing what I’m going to do," and floated the possibility that he may declare a national emergency to begin construction on the wall since lawmakers have refused to appropriate the money to do so.

“I’ll continue to build the wall and we’ll get the wall finished,” Trump said, although a wall is not currently being built. “Now whether or not I declare a national emergency — that you’ll see." Legal experts have questioned the legality of this plan, and it would almost certainly be challenged in court of Trump opted for it.

Harris, like most of her fellow Democratic presidential candidates, has denounced the prospect of a border wall, calling it a "medieval vanity project" and pledging to vote against any bill that includes funding for a wall.

"I'm not going to vote for a wall under any circumstances," Harris said on CNN, adding that she does support stronger border security measures that don't involve building a physical wall.