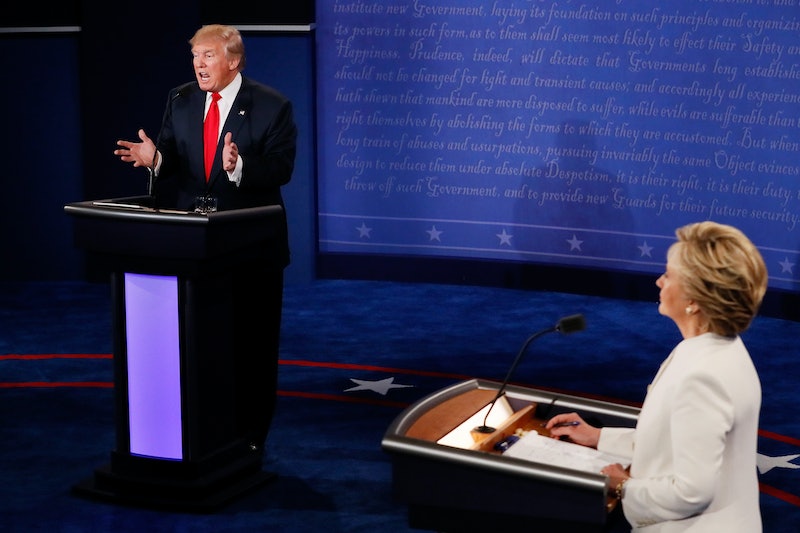 A new report from the New York Times revealed some startling information about Donald Trump and the former political rival who he's repeatedly criticized since campaigning for president. The paper noted that Trump reportedly wanted Hillary Clinton prosecuted this year — and she's apparently not the only one the president wanted to indict. Bustle reached out to the White House for comment on the matter.

The outlet reported on Tuesday that Trump supposedly told his former White House counsel, Donald McGahn II, that he wanted to order the Department of Justice (DOJ) to prosecute both Clinton and former FBI Director James Comey. The New York Times indicated that it was not clear what charges the president reportedly wanted to pursue against Comey and Clinton.

According to the paper, McGahn supposedly pushed back against the president, telling Trump he didn't have the power to initiate prosecutions. While McGahn did inform Trump that he could ask the Justice Department for an investigation, the former White House counsel strongly cautioned against it, the outlet reported. Indeed, in a memo that McGahn reportedly wrote to the president, the lawyer described the potential consequences of Trump requesting an investigation into Clinton or Comey. Some of these consequences included the DOJ's possible refusal to cooperate with his request, potential impeachment, or political fallouts, among others.

Throughout his presidential campaign, Trump repeatedly threatened to prosecute Clinton if he were elected president. For example, during the second presidential debate in October 2016, Trump told Clinton that he wanted to appoint a special prosecutor to investigate her use of a private email server when she was secretary of state. Notably, Clinton's emails were investigated twice by the Federal Bureau of Investigation while Obama was still president. Clinton was twice cleared of any wrongdoing, though the FBI did characterize her handling of classified information as "careless."

Despite evidence establishing no criminal misconduct by Comey or Clinton — and a lack of authority to actually initiate prosecutions — Trump has reportedly still been privately discussing the idea of bringing up charges against both individuals, the New York Times reported. The paper indicated the Trump has reportedly suggested appointing a second special counsel to investigate the former secretary of state and former FBI director.

Notably, though, even if Trump had authority or reason to prosecute Clinton, he would likely still have trouble doing so due to legal limitations. As The Hill reported, the statute of limitations for the majority of federal felonies is five years — and Clinton left her role as Secretary of State in 2013.

It remains to be seen whether Trump will comment publicly on the New York Times' report. Thus far, neither the White House nor the FBI have released a statement on the matter.