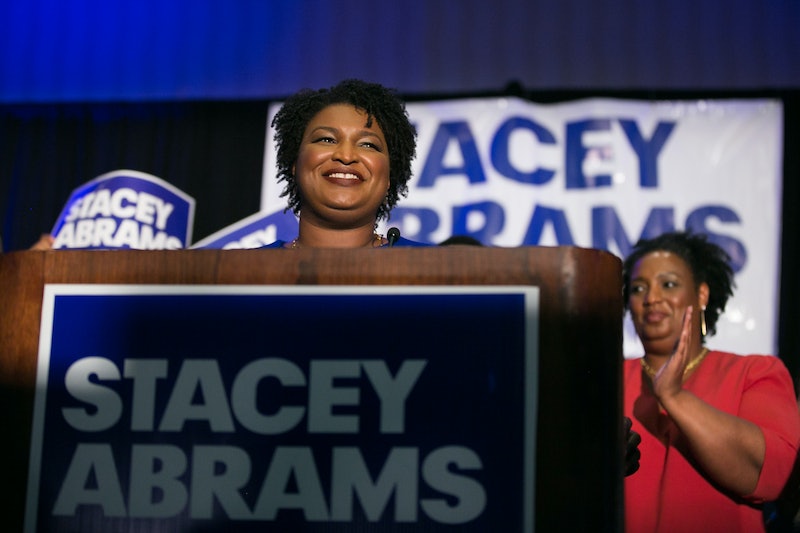 On Thursday afternoon, President Donald Trump responded to Stacey Abrams delivering the Democratic Party's rebuttal to his State of the Union speech on Feb. 5. Trump said he hoped she does a "good job" with her address, then spoke about her campaign for governor of Georgia, claiming without proof that the former first lady Michelle Obama campaigned for Abrams.

Toronto Star's Washington, D.C., correspondent Daniel Dale pointed out Trump's inaccurate comment about the former gubernatorial candidate on Twitter. "This is the fourth time Trump has falsely claimed that Michelle Obama campaigned for Stacey Abrams," Dale said. "She did not do that. The three previous times, Trump went so far as to say Michelle went to Georgia to do this campaigning." Bustle has reached out to the White House for comment.

Shortly after the Nov. 6 midterm election, Dale tweeted a similar correction to Trump's claim, noting that a spokesperson for the former first lady told him that Michelle had not campaigned for Abrams "in any way."

It's unclear whether Trump was conflating the former first lady's endorsement with campaigning. In August, Barack Obama and Michelle endorsed Abrams, who ultimately lost to Georgia Republican Gov. Brian Kemp, along with dozens of other Democratic candidates. And while Obama himself indeed campaigned for Abrams in the Peach State before the midterm election, Michelle did not join him.

Trump's comments on Thursday seem to be in sharp contrast with his previous remarks about Abrams. As The New York Times noted in early November 2018, Trump disparaged Abrams prior to the election, saying despite her breadth of experience that she was unqualified to be governor

Shortly after he gave his remarks, Abrams responded to Trump's criticism when she appeared on NBC News' Meet The Press show. "I find his assessments to be vapid and shallow," Abrams said. "I am the most qualified candidate. I am a business owner. I am a tax attorney who was trained at Yale Law School. I am a civic leader who helped register more than 200,000 Georgians."

The Democratic Party announced on Tuesday that Abrams accepted its offer to deliver the response to Trump's SOTU speech. Senate Minority Leader Chuck Schumer praised Abrams, saying, "She is just a great spokesperson. She’s an incredible leader. She has led the charge for voting rights, which is at the root of just about everything else. … I’m very excited that she’s agreed to be the respondent to the president."

Abrams is also featured in a Super Bowl ad about voter rights in Georgia on Sunday, just two days before she responds to Trump.