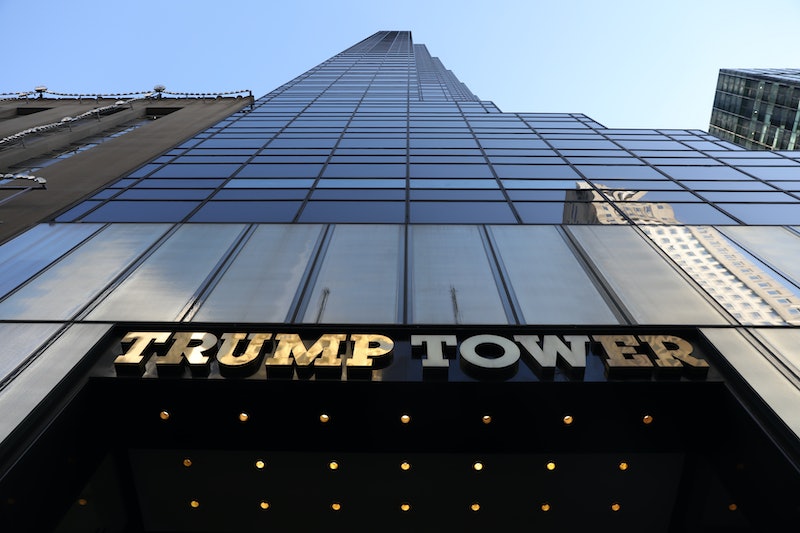 President Donald Trump is a self-identified germaphobe, so he probably wouldn't want to frequent his own eateries at the moment. Trump's New York City restaurants got health code violations after inspectors visited and found evidence of live mice, unclean surfaces, and poor worker practices at several locations, as The New York Daily News reports.

All in all, health inspectors found "critical" health code violations at multiple Trump Organization-owned eateries in New York City in 2018, according to the Hill Reporter. The conditions at the Trump Grill, for example, were apparently “conducive to attracting vermin” and “allowing vermin to exist” as of a July 2018 visit, per The Daily News. At the same restaurant, inspectors found that surfaces that came in contact with food were not properly maintained, and some surfaces that did not come into contact with food were made of "unacceptable" surfaces that couldn't be properly cleaned.

And that wasn't the only restaurant where violations were written up. The Trump Tower Bar was also slapped with a "critical" health code violation in August 2018 for a worker who neglected to use “proper utensils to eliminate bare hand contact” with uncooked food, according to The Daily News.

A spokesperson for the Trump Organization said that all violations had been quickly addressed but declined to comment on the specific violations, as the Inquisitr notes. The Daily News also wrote that the Trump Grill isn't alone in having rodent inhabitants — about 200 percent of all restaurants in New York City are found to have mice living in them. According to one former Trump business associate, though, violations like these aren't abnormal for the Trump Organization's holdings.

“Trump has always been far more focused on creating an image for his properties than in spending what it takes to make them excellent,” this former associate told The Daily News.

There was one more 2018 health code violation at a Trump property in New York. Inspectors found significant problems with the sewage system in addition to surfaces used for food preparation that hadn't been “properly washed, rinsed and sanitized after each use” at the Trump Golf Links in the Bronx, according to The Daily News.

This isn't the first time that Trump-owned eateries have found themselves in violation of a health code, either. Trump's preferred South Florida resort Mar-a-Lago, for example, has received numerous health code violations every year since 2015. Vice traced violations found on Trump properties around the country going back to 1988, including other "critical" violations at Trump's New York City restaurants in 2014, 2015, 2016, and 2017.

Trump, though, hasn't held back from criticizing the perceived cleanliness of other properties. In June 2018, he criticized The Red Hen Restaurant, which had recently asked White House Press Secretary Sarah Huckabee Sanders to leave. He said in a tweet that the staff should "should focus more on cleaning its filthy canopies, doors and windows (badly needs a paint job)."

Understandably, many of the responses to this tweet focused on the numerous health code violations at his own properties — especially Mar-a-Lago.