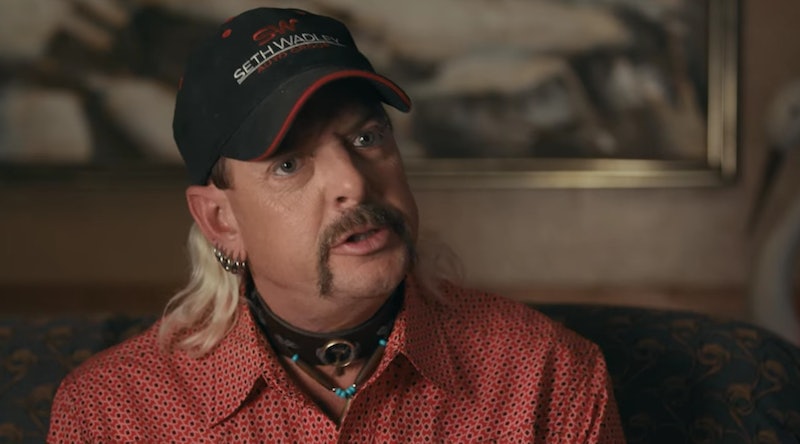 Joe Maldonado-Passage may have mistreated wild animals and was allegedly responsible for the almost attempted murder of his rival, but President Donald Trump said he'll look into pardoning Joe Exotic (Maldonado-Passage's stage name) from Tiger King. During an April 8 briefing about COVID-19, a reporter asked Trump if he would pardon the Netflix star. He is currently serving 22 years in prison for endangering wildlife and allegedly attempting to hire two hitmen to murder Carole Baskin.

After the reporter asked Trump about his thoughts on helping Exotic get out of jail, Trump first said, "I don’t know. I know nothing about — he has 22 years for what? What did he do?" The reporter explained Exotic's situation to which Trump eventually replied, "I'll take a look."

Trump's declaration will certainly be music to Exotic's ears. In the first episode of Netflix's hit series, the previous Greater Wynnewood Exotic Animal Park owner declared while in jail, "I'm not gonna be accused and go to prison, and lose everything I have for things that other people did. Before this is over with, I'm gonna shutdown everybody."

He has continued to preach his innocence and hope to earn a get out of jail free card. During an interview Exotic did from prison with Netflix on March 22 that was released on April 3, the former big cat owner declared, "It's now time to turn the tables and Joe get out of jail a free man and exonerated from all these charges."

According to a March 26 report from The New York Post, Exotic has also been campaigning for a pardon from Trump. He isn't stopping there either. Exotic even filed a nearly $94 million lawsuit on March 17 claiming he was convicted on false and perjured testimony, according to the Associated Press. He filed the lawsuit against the U.S. Federal Wildlife Service, the United States Department of Interior, the assistant U.S. attorney who prosecuted him, and other witnesses. According to an April 8 Deadline post, one federal judge advocated tossing out Exotic's lawsuit and another judge rejected his attempt to force a recusal in the lawsuit.

Believe it or not, another Trump family member who is known for hunting big game like elephants, has also commented Exotic's current situation. During an April 6 interview with SiriusXM's Jim Norton and Sam Roberts, Donald Trump Jr. admitted he watched the docuseries and said about Exotic, "It doesn’t seem like he was totally innocent of anything. But when they’re saying, 'We’re putting this guy away for 30 years,' I’m saying, 'That seems … sort of aggressive.'"

Who knows if Trump will really look into pardoning Exotic, but he certainly has the power to do so.

More like this
Bachelor Nation's Blake Horstmann Is Dating 'Love Is Blind' Star Giannina Gibelli
By Jake Viswanath and Radhika Menon
Move Over, 'Sunset'! The Drama-Filled Trailer For 'Selling The OC' Is Here
By Nola Ojomu
What That Ominous 'Selling Sunset' Season 5 Finale Could Mean For Season 6
By Orla Pentelow and Brad Witter
Here’s Everything Coming To & Leaving Netflix In July
By Grace Wehniainen
Get Even More From Bustle — Sign Up For The Newsletter