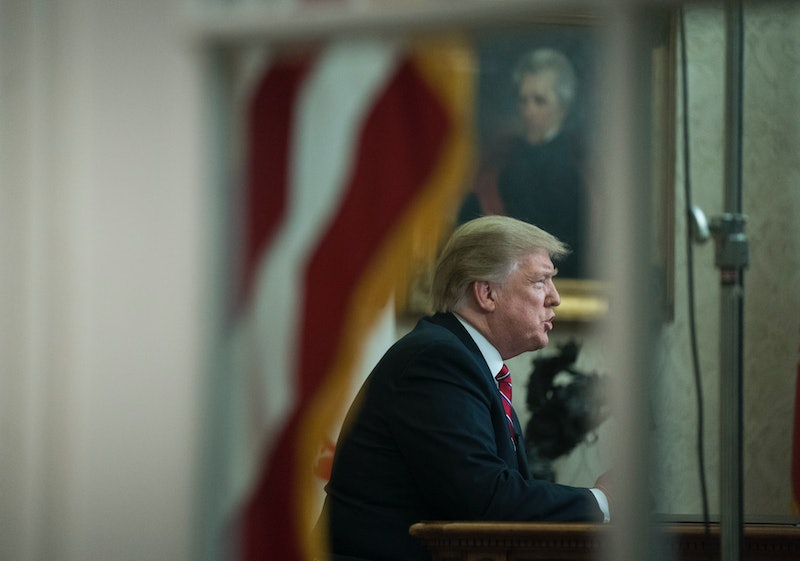 When a series of leaked internal White House schedules obtained by Axios last week showed Donald Trump spent roughly 60 percent of his work day in "executive time," many people were left wondering just what exactly it is the president does during these unstructured blocks of time. As criticism over the president's schedule continues, he's defended his so-called "executive time." In fact, Trump claims he's "generally working" during "Executive Time" and pushed back on attempts to frame it as a negative thing.

"When the term Executive Time is used, I am generally working, not relaxing," Trump tweeted Sunday. "In fact, I probably work more hours than almost any past President."

Axios had reported that three months worth of the president's daily schedule showed he usually spent the first 5 hours of his day in what was listed simply as "executive time." According to Axios, it was former White House Chief of Staff John Kelly who came up with the concept of "executive time" after Trump pushed back on more rigid and structured schedules. But while the internal White House schedules reportedly listed Trump as conducting his "executive time" in the Oval Office, sources told Axios the president actually often spends that time in the White House residence. They claimed "executive time" was when Trump watched TV, read the papers, and made phone calls.

On Sunday, Trump argued that his use of "executive time" shouldn't have been framed as something negative. "The media was able to get my work schedule, something very easy to do, but it should have been reported as a positive, not negative," he tweeted.

In a separate tweet posted just minutes later, Trump claimed he "had no choice but to work very long hours" because "the fact is, when I took over as President, our Country was a mess." He went on to claim he'd inherited "Depleted Military, Endless Wars, a potential War with North Korea, V.A., High Taxes & too many Regulations, Border, Immigration & HealthCare problems, & much more."

It's worth noting, however, that Trump didn't dispute Axios' report nor did he dispute its characterization of how he spends "executive time."

In the week since the president's schedules were leaked, the White House has moved to downplay the information, with Acting White House Chief of Staff Mick Mulvaney saying they didn't contain "that valuable of information" in an interview on NBC's Meet the Press.

"That Executive Time is on there to allow the president to prep for the next meeting, to debrief from the previous meeting," Mulvaney said, pushing back on the idea that Trump spent a majority of his day not working. "The phone calls start at 6 in the morning and go until 11 at night, so I can assure you he's working more than on the calendar."

White House Press Secretary Sarah Huckabee Sanders has said the unstructured "executive time" gives the president "a more creative environment that has helped make him the most productive president in modern history."

But although the White House has appeared to largely brush off reports of Trump's "executive time," Politico has reported they've launched an aggressive investigation to uncover who was behind the leaked schedules.