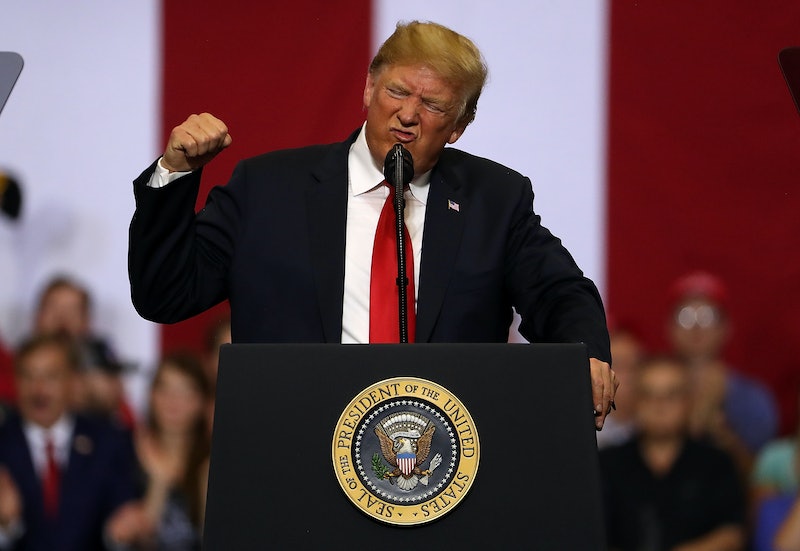 At a rally Wednesday in North Dakota, President Trump offered up some vintage-style comments about himself, his supporters, and his opponents. Trump dubbed himself and his enthusiasts the "super elite," bragging they possessed "more brains" and "nicer boats" than the group (college-educated coastal liberals) that is usually dubbed as "elite."

Apparently, the wrongful assignation of the "elite" moniker (in his view) has really bothered the president. As reported by The Hill, Trump told his rally audience in Fargo, “I hate it, I meet these people, they call it the elite." He'd go on to call that understood group of left-leaning moneyed influencers "stone cold losers."

“We got more money, we got more brains, we got better houses and apartments, we got nicer boats, we’re smarter than they are and they say they’re the elite,” Trump scoffed. In lights of these claims, Trump declared that he and his fans were the real deservers of elite status.

The Hill also reported similar comments made during a rally last week in Minnesota. In that case, Trump said it was his superior brains and capacious living quarters that gave him highest status. The president bragged, "I have a much better apartment than they do" and claimed "I'm smarter than they are." As evidence, Trump put it in simple language: "I became president, and they didn't."

During his Minnesota rally, Trump also coopted a term used by Hillary Clinton to deride Trump voters. "I'm representing the best people on earth, the deplorables," he told his audience. During the 2016 presidential campaign, Clinton notoriously said, "To just be grossly generalistic, you could put half of Trump’s supporters into what I call the basket of deplorables. Right?" The insult became a kind of rallying cry for Trump fans in the ensuing months.

Outrageous statements are familiar territory for Trump. Some have argued he purposefully parlayed bombastic language to stunning success during his presidential campaign, creating a level of media coverage unheard of in modern history. The New York Times reported in its 2016 assessment of free media that Trump had earned $2 billion in free publicity. The Donald's ability to earn media absolutely dwarfed any of the other major contenders. (Clinton, the next-best media earner, generated less than half the dollar amount of Trump during the presidential election.)

Clinton herself laid some of the blame for her election loss at the feet of the media in What Happened, her account of the 2016 campaign. "Their [the media's] real problem is they can’t bear to face their own role in helping elect Trump, from providing him free airtime to giving my emails three times more coverage than all the issues affecting people’s lives combined," Clinton wrote.

Trump didn't just get that free media from wacky and/or offensive verbal comments, either. A long-time aficionado of Twitter and its media-generating capacity, Trump either intentionally used his often shocking tweets to garner publicity, or inadvertently benefited from his willingness to write scandal-making Twitter copy. Writing for The Street, Emily Stewart pointed out that Trump earned himself nearly $200 million in publicity from his "taco bowl" tweet on Cinco de Mayo.

Much media fanfare followed that tweet, understandable given its almost poignant lack of self-awareness and cultural sensitivity. "Happy Cinco de Mayo! The best taco bowls are made in Trump Tower Grill. I love Hispanics!" Trump wrote.

But nonstop media coverage necessarily pushed out stories about other, likely more lastingly important stories. It's a tried and true method Trump has used to his own continuing benefit, in large part because it puts the media in a Catch-22: report what is dubiously newsworthy but certainly provocative, or choose to overlook statements from a president that include "I have a much better apartment than they do."

Either way, it's all but assured that Trump will continue to make "super elite" comments for the remainder of his time in office.