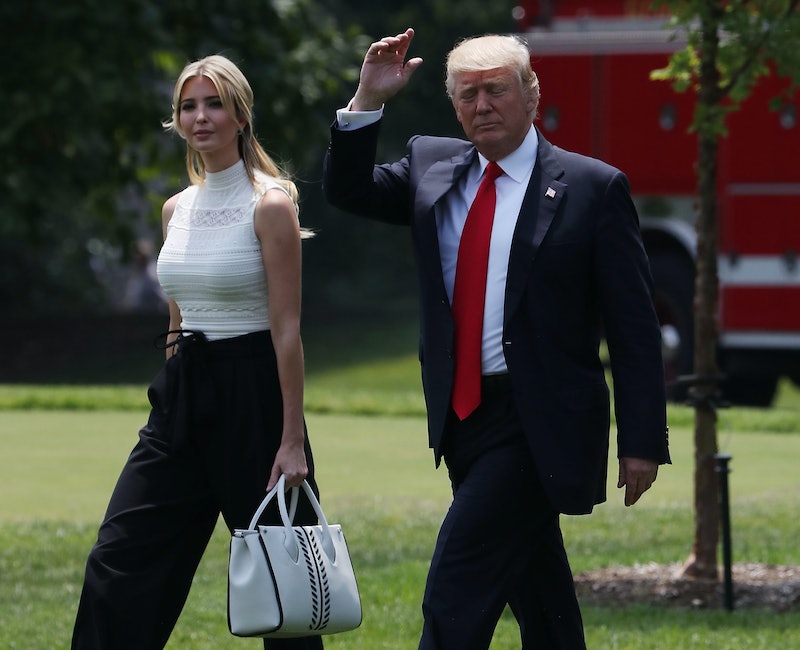 The Washington Post reported Monday that Ivanka Trump, much like Hillary Clinton, used a personal email account for official business while working for the government. But although he spent the better part of a year criticizing Clinton for this, President Trump says Ivanka's email use was way different from Clinton's, and called the report "fake news."

According to the Post, Ivanka violated federal records rules when, in 2017, she sent hundreds of emails about official government business to cabinet officials and White House aides using a personal email account. White House ethics officials discovered this over the fall, the Post reports, and Ivanka responded by claiming that she wasn't aware of the rules that she, as a presidential adviser, was required to follow.

Peter Mirijanian, a spokesperson for Ivanka's attorney. said in a statement that while the president's daughter did use a personal email account after joining the administration, it was "almost always" only to discuss "logistics and scheduling concerning her family."

While talking to reporters on Tuesday, Donald acknowledged he'd only looked at the details of Ivanka's emails "very briefly," but defended his daughter and repeated some of the same attacks he made on Clinton during the 2016 campaign.

Mirijanian said in his statement that Ivanka turned in all of the government-related emails she sent months ago, and that they'll be stored permanently with the administration's other communications. He also claimed that Ivanka never sent any classified information through her personal email account.

Clinton made a similar claim during her own email controversy, telling Meet The Press in July 2016 t0hat she "never received nor sent any material that was marked classified." However, then-FBI Director James Comey later revealed that Clinton had sent 110 emails from her personal server that contained classified information.

During the presidential campaign, Donald regularly attacked Clinton for using a private email server to conduct government business, and pledged to appoint a special counsel to investigate her if elected.

This hasn't happened. However, the Times reported on Tuesday that Donald told White House lawyers in the spring that he wanted to order the FBI to prosecute Clinton and Comey. According to the Times, then-White House Counsel Don McGahn urged him not to do this, and had other lawyers at the White House warn the president that he could be impeached if he ordered the FBI to prosecute Clinton and Comey.

According to NBC News' Marianna Sotomayor, Democrats on the House Oversight Committee are likely to launch an investigation into Ivanka's email use after they assume control of the House in January.