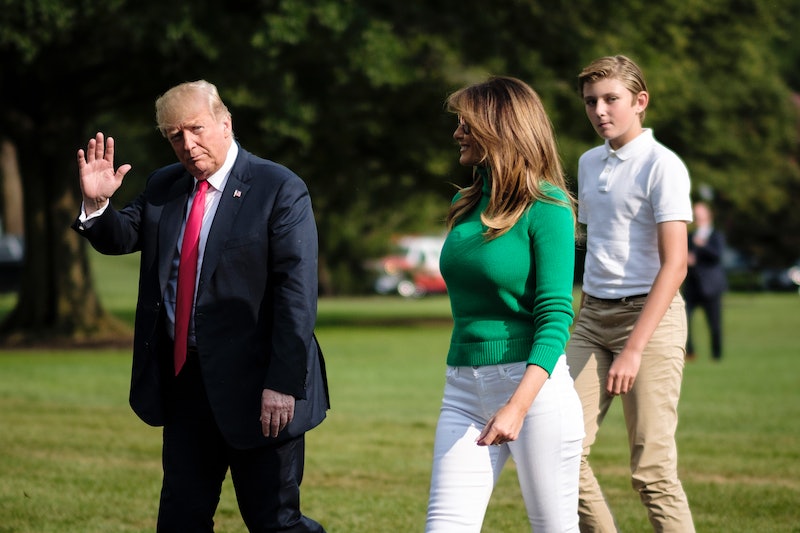 As hundreds of people at two California universities are quarantined after potentially being exposed to measles, a highly contagious virus deemed eliminated 19 years ago, President Donald Trump is urging parents to vaccinate their kids. The president's latest comments appear to be a stark reversal from his previous attempts to caution against vaccines amid controversial and debunked claims that they're linked to autism.

"They have to get the shots," Politico reported Trump told reporters outside the White House when asked what he'd like to tell parents regarding the recent measles outbreak on Friday. "The vaccinations are so important. This is really going around now. They have to get their shots."

But Trump hasn't always been such a clear supporter of vaccinations. In fact, he's previously promoted the repeatedly-debunked idea that vaccines cause autism. "Massive combined inoculations to small children is the cause for big increase in autism," Trump tweeted in August 2012. He repeated a similar argument on Twitter in 2014, writing, "Healthy young child goes to doctor, gets pumped with massive shot of many vaccines, doesn't feel good and changes - AUTISM. Many such cases!"

While running for president in 2015, Trump sought to expand on his apparent anti-vaxxer ideas, telling CNN's Jake Tapper during a Republican presidential primary debate hosted by the cable news network that, "Autism has become an epidemic."

"Twenty-five years ago, 35 years ago, you look at the statistics, not even close. It has gotten totally out of control," he said of autism rates. "I am totally in favor of vaccines. But I want smaller doses over a longer period of time." Trump went on to claim that babies were being "pumped" full of vaccine dosages that "looks just like it's meant for a horse, not a child." He also appeared to imply that he personally knew of many people whose children had developed autism after being vaccinated.

"We've had so many instances, people that work for me," CNN reported he said during the debate. "Just the other day, two years old, two and a half years old, a child, a beautiful child went to have the vaccine, and came back, and a week later got a tremendous fever, got very, very sick, now is autistic."

According to the the Centers for Disease Control and Prevention, there have already been 626 confirmed individual cases of measles in the United States between Jan. 1 and April 19. In fact, the agency has said it expects the year's total number of reported measles cases to easily surpass a previous record of 667 cases set in 2014. Should that happen, 2019 would have had the largest outbreak seen since the virus was declared eliminated in 2000.

According to NBC News, a slew of new measles cases reported earlier this week in New York, New Jersey, and California are likely to bump the total number of confirmed individual cases to at least 695. That number could be substantially higher, however, depending on how serious incidents of potential exposure turn out to be in California.

Some 656 people at California State University at Los Angeles were put under quarantine orders earlier this week after potentially being exposed to the virus, The Washington Post reported. According to the paper, hundreds of other students, faculty, and staff at the nearby University of California at Los Angeles were also warned of a potential exposure caused by an infected student attending classes.