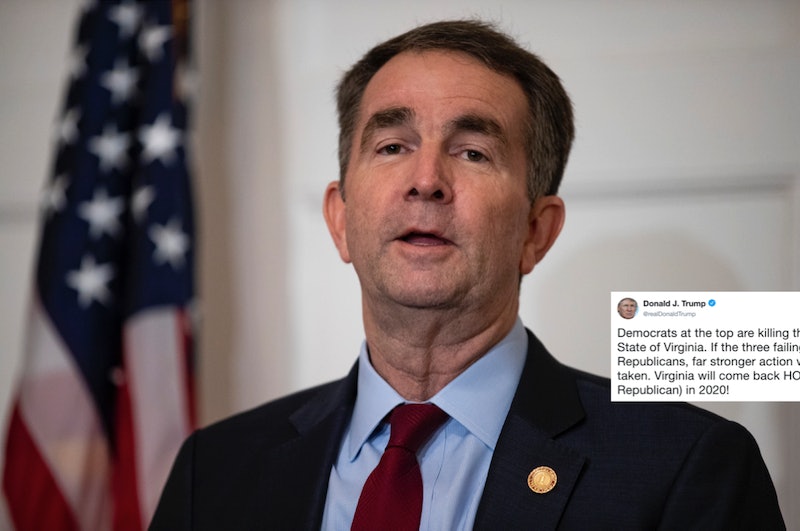 All eyes are on Virginia this week as its government grapples with a series of scandals that are threatening the jobs of its top three officials. President Donald Trump weighed in on potential repercussions of the controversy on Thursday. In an early morning tweet, Trump declared that Virginia politicians' scandals are "killing" the state and will encourage people to vote Republican in 2020.

"Democrats at the top are killing the Great State of Virginia," Trump tweeted on Thursday. "If the three failing pols were Republicans, far stronger action would be taken. Virginia will come back HOME Republican) in 2020!"

Meanwhile, Democrats were much less vocal on Thursday morning. Though liberal leaders in Virginia and around the country adamantly pushed Governor Ralph Northam to resign after a photo leaked from his old yearbook page showing someone in blackface, they were much slower to react to a sexual assault allegation that was raised against Lieutenant Governor Justin Fairfax (which he has repeatedly denied) and a blackface admission by Attorney General Mark Herring.

The Associated Press reported on Thursday that Democratic officials "were rendered practically speechless" by the latest revelations. Like the president, some analysts have suggested that the controversies could damage the Democrats' chances of maintaining their hold on the Virginia legislature in 2020.

The situation in Virginia worsened remarkably on Wednesday. First, Herring put out a voluntary statement admitting that he had once worn "wigs and brown makeup" for a costume in college. "Some friends suggested we attend a party dressed like rappers we listened to at the time ... and perform a song," he wrote in a statement. "That conduct clearly shows that, as a young man, I had a callous and inexcusable lack of awareness and insensitivity to the pain my behavior could inflict on others." Herring apologized and said he would consider resigning in the days to come.

Later in the day, Dr. Vanessa C. Tyson — a politics and black history professor at Scripps College — released a statement detailing her allegation that Fairfax sexually assaulted her in 2004. "What began as consensual kissing quickly turned into a sexual assault," she wrote in a statement. "I cannot believe, given my obvious distress, that Mr. Fairfax thought this forced sexual act was consensual." The National Organization for Women called for Fairfax to resign after Tyson came forward on Wednesday.

Fairfax has continued to deny Tyson's allegations, however. "I take this situation very seriously and continue to believe Dr. Tyson should be treated with respect," he said Wednesday, according to The New York Times. "But, I cannot agree to a description of events that simply is not true."

The Associated Press reports that liberals are struggling with how to proceed. Democratic leaders try to market their party as the one that advocates for racial justice and believes women. If Northam, Fairfax, and Herring were all to resign, the next in line to the governorship would be Republican House Speaker Kirk Cox. Shifting narratives — Northam first said that one of the figures in the yearbook photo was him, but then backtracked — made matters even more complicated.

Virginia's Legislative Black Caucus seemed shellshocked on Wednesday, per the Associated Press, and were not yet sure how to respond. "We've got a lot to digest," the organization's chairman told the agency.