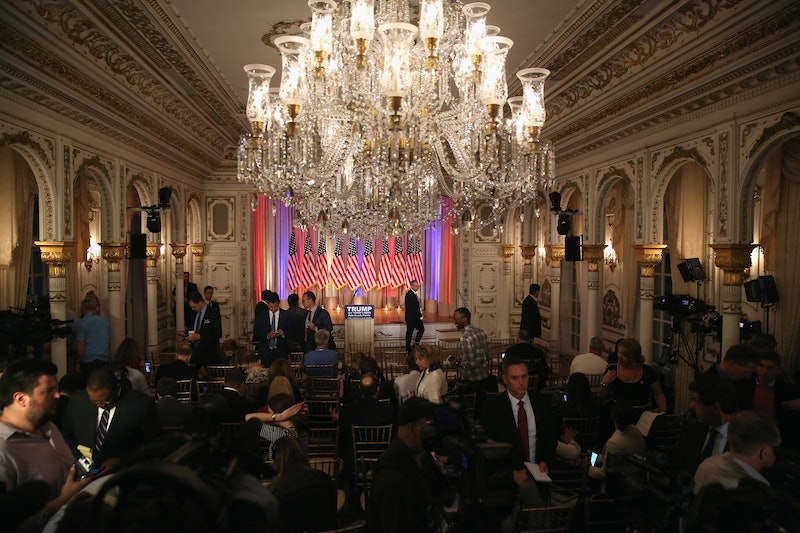 One night in April 2017, something out of the ordinary went down at Mar-A-Lago, according to ProPublica. A group of Trump's staffers reportedly retreated into the resort's Library Bar, and asked the bartender to leave. ProPublica reported that these Trump staffers racked up a $1,000 liquor bill as Secret Service guarded the bar entrance — and taxpayers apparently footed the bill.

According to a copy of the receipt, the bar charged the group just over $1,000 on drinks at the Library Bar. That included a 20% service charge and tax. But the State Department reportedly refused to cover their bill. It was subsequently forwarded to the White House, which paid it in full using taxpayer money, ProPublica reported. Bustle has reached out to the White House for comment.

Because the group had asked the bartender to leave the room so they "could speak confidentially," they did not pay for any of their drinks up front or sign for anything. Instead, they poured their own drinks, ProPublica noted, and Mar-a-Lago later wrote a bill for the missing alcohol.

But the large liquor bill apparently wasn't the only cost the government covered on behalf of Trump staffers. Citing emails that were released as part of an ongoing lawsuit between governmental transparency group Property of the People and the federal government, ProPublica reported that the Trump organization charged the federal government the maximum allowable federal rate for hotel rooms at Mar-a-Lago.

Mar-a-Lago rejected a $200,000 flat fee for room costs incurred by Trump's employees during the first term of his presidency, per ProPublica. Instead, the resort reportedly demanded 300% of the federal government's per diem rate, which comes out to approximately $546 night for a hotel room.

Ultimately, at least 24 White House and federal staffers — including prominent advisers like Bannon, Sean Spicer, Stephen Miller, and Hope Hicks — stayed at Mar-a-Lago during Chinese President Xi Jinping's visit in April 2017, ProPublica reported. Other staffers, however, stayed at nearby hotels like the Hampton Inn and Hilton Garden Inn, so that the State Department wouldn't break its own competitive bidding rules — and those hotels charged significantly cheaper room rates, ranging from $195 to $305 per night.

In a series of tweets posted on Wednesday, ProPublica's Derek Kravitz explained that the State Department had ordered a special Citibank card that federal employees could use exclusively to pay for Mar-a-Lago rooms, but that other problems nonetheless continued to emerge. The State Department and Mar-a-Lago went back and forth for months, haggling different rates for rooms and meeting spaces, Kravitz reported.

That the White House covered Trump staffers' liquor bill — and possibly other costs that they incurred during Jinping's visit — indicates that it was really taxpayers who were paying the price, ProPublica reported. According to Kravitz, the State Department is still slated to release 1,800 pages of records as part of the Property of the People lawsuit, and these records may contain more information about how the current administration has been handling staffer expenses.