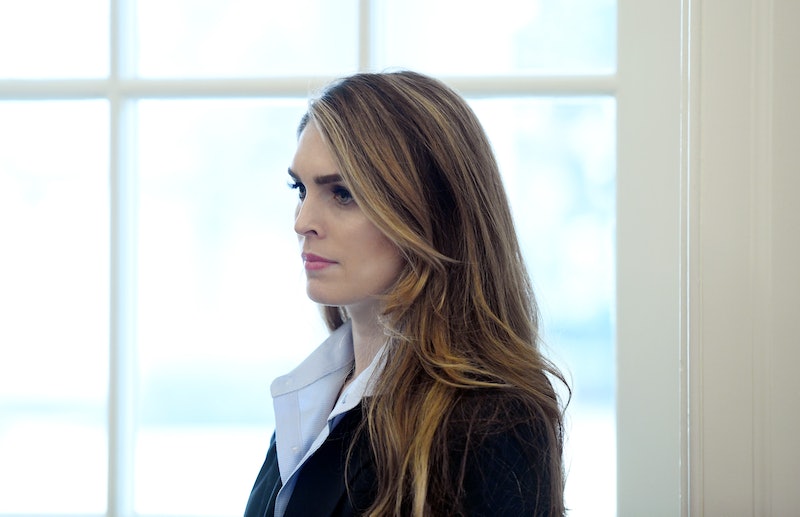 Hope Hicks may be returning to Trumpworld. The former White House communications director is being courted by administration staffers to work for President Donald Trump again in some capacity, according to a report from Politico. Liberal commentators rejoiced at her departure just five months ago; that exuberance might've been dampened a bit if they'd known just how much White House staffers really want Hope Hicks to return and are committed to making it happen.

Hicks left the Trump administration in late March, in part because she didn't enjoy life in Washington D.C., according to The New York Times. She'd worked as the president's communications director for about seven months, and prior to that, she'd been the White House's first-ever director of strategic communications. She was also Trump's press secretary during his campaign for president.

The president and many others in the White House were dismayed to see her go. There was the fact that Trump trusted and relied on her more than most senior officials — "She's like a security blanket for the boss," a source close to Hicks told Vanity Fair in February — and also the fact that she was reportedly a steadying presence within a chaotic administration. Tina Nguyen at Vanity Fair wrote that her departure had the effect of "depriving Donald Trump of whatever glue was holding his West Wing together."

So it's not really a surprise that many want her back. According to Politico, people close to Trump are trying to recruit her for his 2020 campaign, and Hicks is considering taking on some sort of (potentially informal) role.

"I think a lot of people would love to see her involved," White House press secretary Sarah Huckabee Sanders told Politico. "She is incredibly smart, talented, and she gets the president. It would be a win across the board for the president if she was involved in any capacity." Hicks herself did not comment on Politico's story when the magazine reached out.

But administration staffers aren't the only ones who are bidding to be a part of Hicks' next career move. According to Politico, she's been meeting with representatives from companies like Goldman Sachs, Ralph Lauren, and Blackstone as she contemplates her future plans. Trump may want Hicks back, but he has some competition.

Just months ago, opponents of the Trump administration were rejoicing at Hicks' departure. Many had resented the fact that her low-profile kept attention off her role as a major enabler of Trump's agenda (GQ named her the most powerful person in D.C. in February). Late night host Samantha Bee made that argument in her segment on Hicks' exit, which went viral in March.

"I've never talked much about Hope because — unlike every other member of the Trump orbit — she doesn't careen onto our television screens, lobbing lies and racial invective every damn day," Bee said. "But that doesn't mean she should get a pass."

People like Bee would likely be dismayed to see Hicks back on the national scene. But return she may; only time will tell.