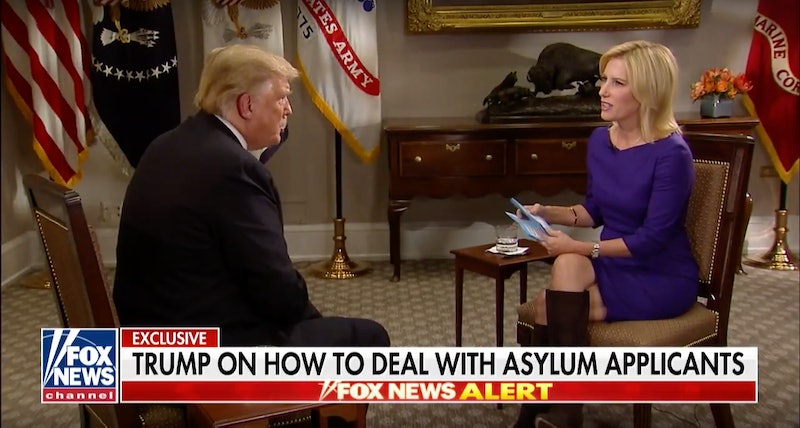 Currently, a caravan of over 3,000 migrants planning to apply for asylum in the United States is making its way toward the southern U.S. Border. During an interview on Fox News on Monday, President Trump told Laura Ingraham that migrant caravan asylum seekers will be detained as they await trial — and held in what he referred to as "tent cities."

The president told the Fox News host that, instead of releasing asylum seekers from the migrant caravan after they cross into the United States, immigration authorities plan to house them in tented cities along the border until their asylum trial date arrives. Notably, this may violate court orders that ban long-term detention of families or children, as The New York Times described. Trump expounded on his idea to Ingraham, saying:

Trump also told Ingraham that he perceives the wait period in detention as a deterrent for undocumented migration. "We are going to take the people, we're going to put them in, and they're going to wait," he asserted. "When they find out that that happens, you're going to have far fewer people that come up [from Central America]."

Later on in his interview, the president also addressed criticisms that he is planning to send 5,200 troops to the U.S.-Mexico border for political reasons. As The New York Times reported, the active-duty troops are set to deploy to the border this week, ahead of the midterm elections, even though the migrant caravan is reportedly weeks away from reaching the United States.

The president pushed back strongly against this critique — and, in the process, characterized the migrant caravan as an "invasion":

We're being invaded. When you look at that, thousands of people ... when you looked at that bridge loaded up with people, that's called an invasion of our country. This has nothing to do with elections. And I've been saying this long before elections. I've been saying this before I ever thought of running for office. We have to have strong borders. If we don't have strong borders, we don't have a country.

Some, including Jason Dempsey, a former Army infantry officer and current adjunct senior fellow at the Center for a New American Security, have pushed back against the president's characterization of the active-duty troops as a necessary addition to the border. “This is using the troops as props,” Dempsey told The New York Times. "We’re using a bunch of people to waste their time while they backstop the Border Patrol.”

As USA Today described, these active-duty troops will be stationed at the border alongside National Guard units and Border Patrol agents. They are expected to support Border Patrol officers but not to engage in any type of law enforcement work.

Overall, between the planned erection of tent cities and the military presence at the border, President Trump seems keen to make sure that the visuals at the border align with his self-reported strong border stance. Time will tell what type of experience the migrant caravan will face in the United States — and whether Trump will follow through with his plans.