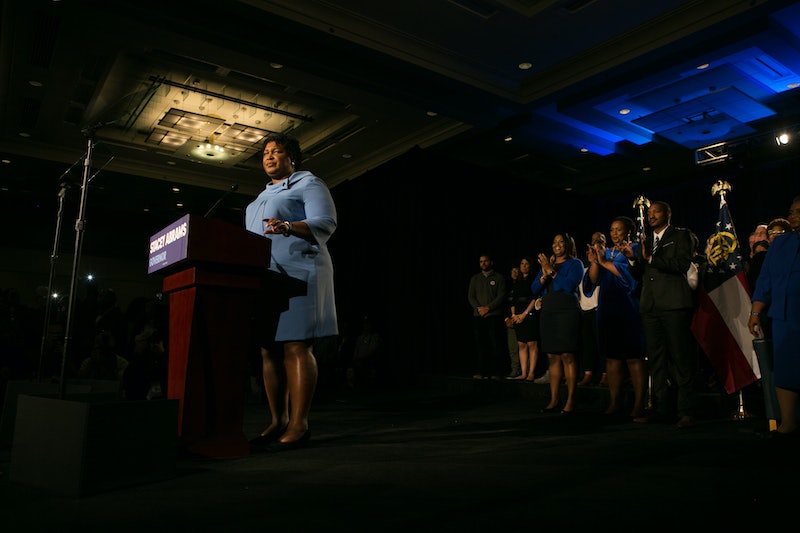 In an interview with reporters Wednesday, President Trump said that Stacey Abrams will lose the 2020 Senate race in Georgia if she decides to enter it. Abrams narrowly lost her campaign for the Georgia governorship in 2018, and delivered the Democratic response to Trump's State of the Union address on Tuesday.

“[Incumbent Republican] David Perdue is an incredible senator, if you remember, and will be very hard to beat,” Trump told reporters on Wednesday, according to USA Today. "I think it’s a mistake for [Abrams] to run against him because I don’t think she can win."

Abrams' 2018 campaign to become the nation's first black female governor was ultimately unsuccessful. However, many prominent Democrats believe the election was stolen: Abrams' opponent, then-Georgia Secretary of State Brian Kemp, invalidated or froze over a million voter registrations before the election, in many cases without informing the voters, and ultimately defeated her by less than 60,000 votes. Abrams has refused to acknowledge Kemp as the "legitimate" governor of Georgia, and instead refers to him as the "legal" governor.

But despite her loss, Abrams' campaign elevated her national profile dramatically and made her a star in the Democratic Party. The party picked her to give the response to Trump's State of the Union, and according to Politico, national and state Democrats have launched "a full-court press" to recruit her to run for the Senate in 2020.

Abrams told USA Today in December that she "will certainly run for office again." It's not clear what office she'll seek, however. She told Politico in December that she's considering both a Senate run and another go at the governor's mansion in 2022, and some have floated her name as a possible vice presidential or even presidential candidate for 2020.

“I am open to all options," Abrams told Politico at the time, "and it’s too soon after the election to know exactly what I’m going to do.”

Trump addressed the possibility of an Abrams presidential bid on Wednesday, too, telling reporters that he'd "love for her to run."

"Because so far, I’m liking the candidates and she’d be another one I’d like," Trump elaborated. "To run for president you’re supposed to have won, unless you’re a non-politician like me. I’d never ran. I’m one for one." (Trump is not one-for-one in his electoral pursuits, as he ran unsuccessfully for president in the 2000 campaign.)

In his comments Wednesday, Trump also wrongly asserted that Abrams "had Michelle Obama" campaigning for her in Georgia during her gubernatorial campaign. That never actually happened; Barack Obama hit the campaign trail for Abrams in 2018, but Michelle did not. According to the Toronto Star's Daniel Dale, Trump had made this false claim at least four times before repeating it again Wednesday.

It's been said that there's a "State of the Union response jinx," as several rising stars in both parties have seen their political fortunes crumble after delivering the response. Abrams' response, however, was well-received, with many progressives and even several Fox News hosts praising it after it aired.