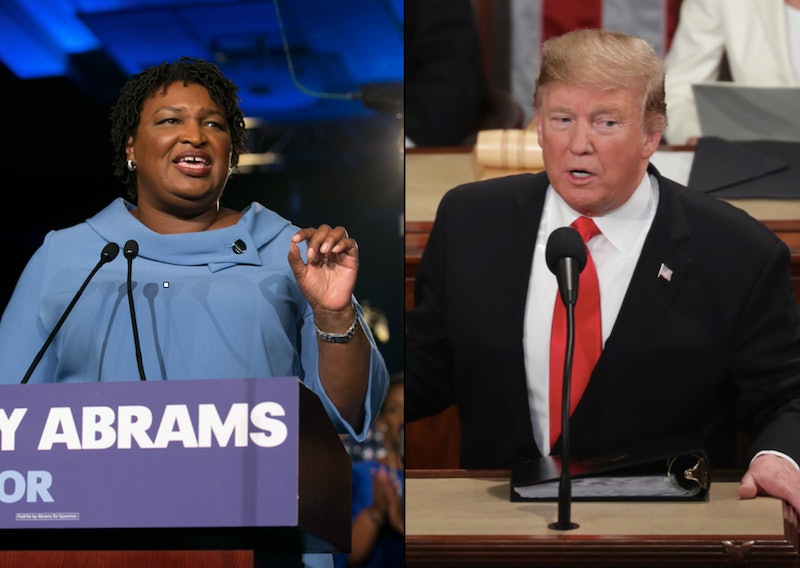 While delivering the official Democratic response to President Trump's State of the Union (SOTU) address, Stacey Abrams addressed the government shutdown that lasted most of January, denouncing the president for initiating it expressing support for the federal workers it affected. Trump, by contrast, didn't mention the affected workers once during his SOTU speech, or even acknowledge that the shutdown had happened.

"Making the livelihoods of our federal workers a pawn for political games is a disgrace," Abrams said in her speech, according PBS' Yamiche Alcindor. "The shutdown was a stunt engineered by the President of the U.S, one that defied every tenet of fairness and abandoned not just our people, but our values."

Abrams said that during the shutdown, she volunteered to distribute meals to federal workers who, thanks to the shutdown, had "waited in line for a box of food and a sliver of hope, since they hadn't received paychecks in weeks."

Before Abrams took the stage, Trump entered the House chambers and delivered what would end up being the longest State of the Union address since the Clinton administration. Over the course of his 82-minute-long speech, the president denounced undocumented immigrants, praised the U.S. economy, trumpeted the criminal justice reform bill that he signed in December, boasted about America's history of space exploration, and ordered Congress to ban so-called "late-term" abortions.

He did not, however, acknowledge the 35-day government shutdown, which was the longest in U.S. history.

During those 35 days, Trump repeatedly demanded that Congress provide funding for a U.S.-Mexico border wall, and said that he wouldn't sign any bill that didn't include such funding. But Democrats — namely Speaker of the House Nancy Pelosi and Senate Minority Leader Chuck Schumer — refused, and in a move that both his detractors and supporters viewed as a cave, Trump ultimately signed a funding bill with no money for a wall. During the shutdown, Trump's approval rating fell by 7 points, according to an NPR/PBS/Marist poll.

Some speculated that Trump might use his State of the Union speech to declare a national emergency and authorize construction of a border wall without congressional approval, but he didn't.

Abrams, a lawyer, voting rights activist and former majority leader in the Georgia legislature, drew national attention during her 2018 run for Georgia's governorship. She ran against Brian Kemp, who was then the state's secretary of state, and Kemp drew heavy criticism during the campaign for freezing or invalidating the voter registration forms of over 1.4 million Georgians, in many cases without telling them.

Abrams lost that election by around 55,000 votes. Several Democratic senators accused Kemp of stealing the election; since his swearing in, Abrams has refused to call him the "legitimate" governor, referring to him only as the "legal" governor. Voting rights was one of many issues that she touched on during her response to the State of the Union.

"Let's be clear: Voter suppression is real," Abrams said. "From making it harder to register and stay on the rolls, to moving and closing polling places, to rejecting lawful ballots, we can no longer ignore these threats to democracy."

According to Politico, Georgia Democrats are trying to recruit Abrams to run for the Senate in 2020. She hasn't announced her plans yet.