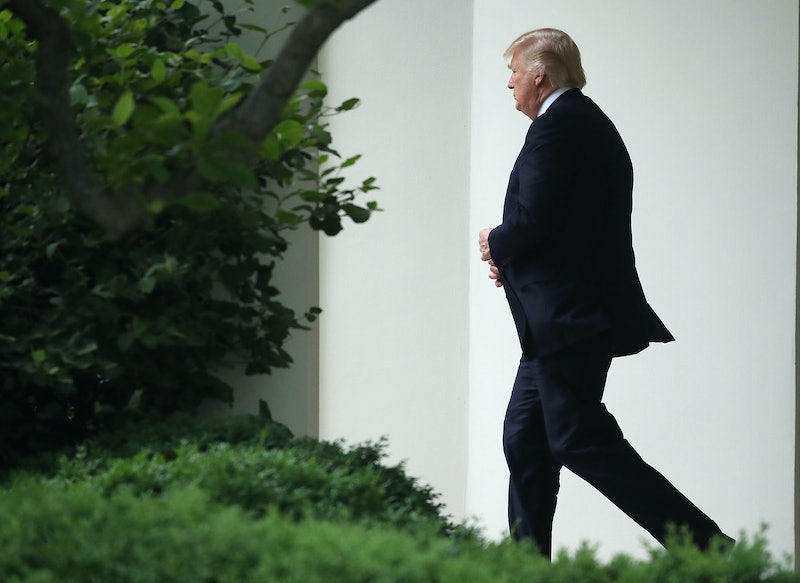 Anyone who happened to be scrolling through Twitter around 5:30 this morning got a rough wake-up call, so to speak: Trump threatened James Comey on Twitter about "tapes" of their conversations, warning the former FBI director against leaking to the press. If the Richard Nixon Library was able to troll Trump after he fired Comey by noting that the 37th president himself had never fired an FBI director, in this case, it seems like there's nothing that they could possibly do to avoid to comparisons.

Trump, who has been on the defensive on Twitter and elsewhere since news of Comey's ouster created a firestorm, let loose even more than usual in a series of tweets on Friday morning. But amid the tweets about fake news and a threat to cancel all press briefings, the tweet directed to Comey still stood out.

The move to fire Comey drew comparisons to Nixon's so-called Saturday Night Massacre, when Nixon attempted, and eventually succeeded, to fire the man investigating him — much like Trump did with Comey. If Trump wanted to avoid further comparisons to the biggest political scandal in American history, then this tweet was a really bad idea. A huge part of the Watergate scandal that engulfed Nixon and eventually ended his presidency was that he was secretly recording all of his White House conversations — and now, Trump seems to be implying that he was doing the same thing.

It is, of course, very possible that Trump is just making a baseless threat, and there are indeed no tapes at all that Comey need worry about, should he decide to start leaking to the press. After all, Trump has made much less cryptic claims on Twitter about things that were entirely untrue, like his claims of widespread voter fraud or his accusation that President Obama had wiretapped him.

Before the possibility that the existence of Trump's White House tapes is ruled out, though, this will just end up contributing to the maelstrom of controversy surrounding the 45th president. What makes this even more suspicious are the reports that Trump pressed Comey to pledge his loyalty at a dinner in January — which Comey declined to give, saying instead that he would always be honest. Trump has not reacted directly to that report, but his deputy press secretary, Sarah Huckabee Sanders, said that they "don't believe this to be an accurate account," and that the president would never ask for a declaration of personal loyalty to him.

For the sake of the republic, you can hope for now that Trump is simply making another unfounded claim, as he has done so many times before. And as he's not known to be a great student of history, perhaps someone in his circle should tell him that "tapes" similar to the ones he seems to be threatening his former FBI director with once got one of his predecessors into a lot of trouble.