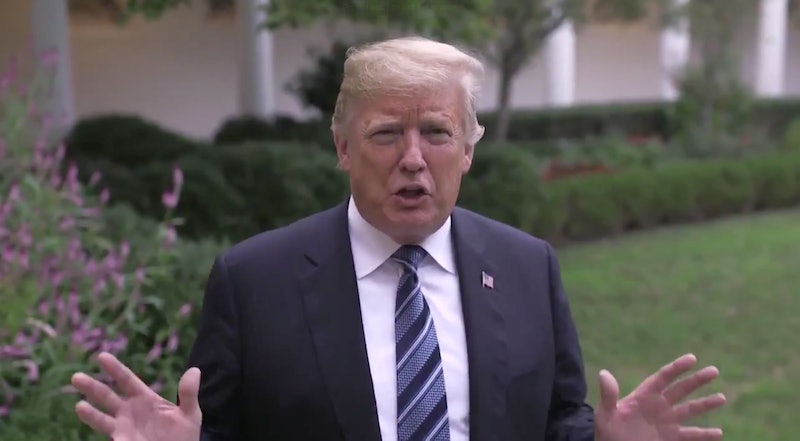 Florence the hurricane may be over and done with but the storm and its aftermath still pose dangers to the affected communities — or so the National Weather Service says. But even though the government's job is far from finished, President Donald Trump is already defending his handling of Hurricane Florence on Twitter.

Trump focused quite a bit on the storm this past week, even filming a Twitter video that warns people to take shelter but also underlines how prepared officials were. "We're fully prepared," Trump said. "Everything you can imagine, we are ready." He also said at the time that his administration did an "did an unappreciated great job in Puerto Rico" where some 3,000 people died.

Now Trump's trying to hammer home that point on preparedness this time around in two more tweets on Tuesday. In them, he attacks the Democrats for future complaints about the Trump administration's response to the storm:

Right now, everybody is saying what a great job we are doing with Hurricane Florence – and they are 100% correct. But don’t be fooled, at some point in the near future the Democrats will start ranting that FEMA, our Military, and our First Responders, who are all unbelievable, are a disaster and not doing a good job. This will be a total lie, but that’s what they do, and everybody knows it!

Hurricane Florence is now just a storm, and the rains have moved out of the Carolinas and Virginia. But the National Weather Service writes that rivers are still rising. "Even as #Florence exits and weather conditions improve, hidden dangers exist," the NWS tweeted with a link to learn more about the dangers and how to stay safe. More than 30 people have died from the storm.

The Wall Street Journal reported Monday on Trump's defensiveness regarding the storm and pointed primarily to his tweets. They noted that he even retweeted something in Spanish that was a warning for residents of the areas hit by the storm. Over the weekend and on Monday, Trump's feed was ablaze with retweets of government agencies such as FEMA, the U.S. Coast Guard, the CDC and others.

Trump also retweeted a post from Homeland Security Secretary Kirstjen Nielsen that underlined the active role he was taking in the response. "Just finished briefing @POTUS, @VP, @WhiteHouse homeland security team on Hurricane #Florence w @FEMA_Brock," Nielsen wrote. "The entire federal gov is working closely with our state & local partners on the response. Importantly, this storm is not over & major flooding could take place all week."

On Sunday, the president also posted a tweet focusing on those responding to the storm. "FEMA, First Responders and Law Enforcement are working really hard on hurricane Florence," Trump wrote. "As the storm begins to finally recede, they will kick into an even higher gear. Very Professional!"

Public opinion will be the ultimate judge of Trump and the administration's response — and the president is counting on many minds still not being made up.