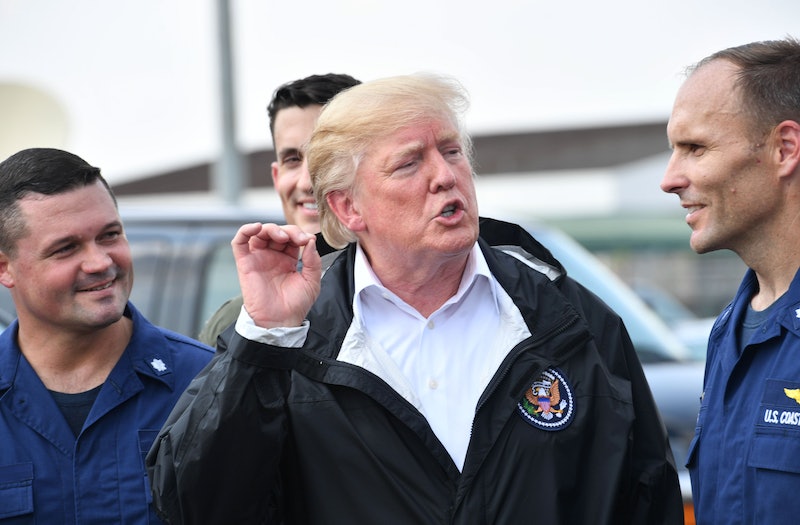 During his visit to Texas, amid the ongoing disaster of Hurricane Harvey, President Donald Trump seemingly couldn't help but poke at perhaps his oldest, most familiar rhetorical foe: the news media. Speaking alongside members of the U.S. Coast Guard on Saturday afternoon, Trump used Hurricane Harvey to jab at the media, praising the coast guard for bravely going into winds "that the media would not go into."

Unless, according to the American president, "it's a really good story." The moment drew some attention on social media for the peculiar tone it struck, especially considering there were multiple high-profile instances throughout the storm of reporters helping to save people from the floods. Trump's entire trip to the storm-stricken regions of Texas has come under scrutiny for several awkward and bewildering moments.

From his initial misstatement that he'd "witnessed firsthand" the damage caused by Harvey ― in reality, he stayed well away from the ravaged flood zones ― to his strangely upbeat-sounding tweet about the storm ending with "thanks," to his shouting-out his crowd size, there have been plenty of awkward moments to sift through. Moment which, tiresome as it is to say, would likely have been treated as alarming or controversial for any other president.

Trump's anti-media rhetoric has been a reliable part of his first several months as president, perhaps the most reliable. Whether accusing major outlets of running "fake news," failing to accurately represent the sizes of his crowds (which have reportedly been fading in recent months), or tweeting anti-CNN gifs of the sort you'd typically expect from a not-terribly-creative Redditor, it's one of his most durable traits as commander-in-chief.

And despite speaking in the midst of an ongoing crisis, he seemingly slid right back into that familiar territory on Saturday. While there were indeed some viral anti-media moments to emerge from Harvey ― like when ABC News reporter Tom Llamas informed police of "looters" at a Houston supermarket at the height of the flood, or when a victim of the storm excoriated a CNN interviewer at an evacuee shelter ― you typically wouldn't see a president join in on the act. Much less given the dangerous conditions many reporters have been working in for the past week.

But Trump is Trump, and it's no longer even remotely surprising for him to voice this kind of anti-media sentiment. Really, his remark on Saturday was milder and less pointed than many of his previous jabs, delivered with a mild hand wave and relatively restrained tone rather than his usual, more aggressive style.

But against the backdrop of a major storm, it's nonetheless a strange thing to hear a president leaning back on his tried-and-true, campaign-era rhetorical tactics. Or, at least, it used to be.