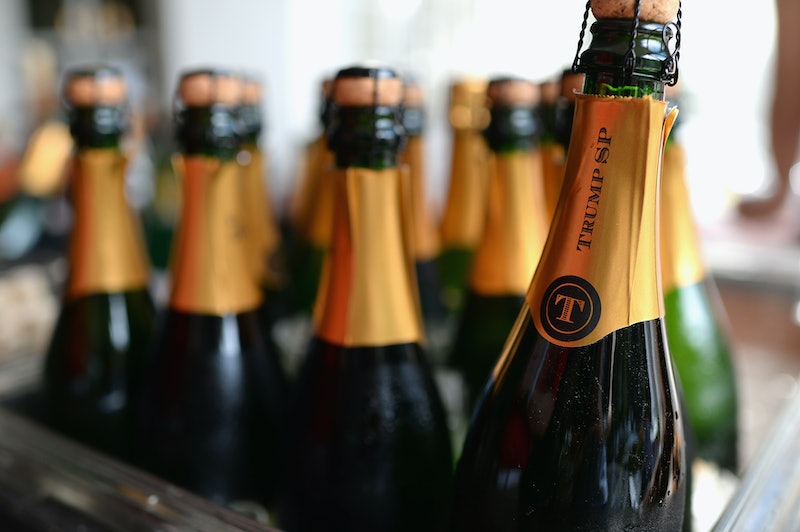 Back in December 2016, President Donald Trump told his Twitter followers that his administration would follow "two simple rules: buy American and hire American." But it doesn't seem like this philosophy applied to the Trump Winery, which is looking for foreign workers in its establishment in Charlottesville, Virginia, according to a BuzzFeed News report on Monday.

Bustle has reached out to both the White House and Trump Winery, which is owned by Trump's son Eric, for comment.

The BuzzFeed News report refers to a petition filed to the Department of Labor, which shows the Trump Winery seeking 23 foreign workers under the federal H-2 visa program. This particular program allows companies to hire foreign labor on a temporary basis as long as no qualified American worker has applied for the role.

If hired, these workers will tend to the 1,300-acre estate from the middle of March to the latter part of October, according to the petition on the Labor Department website. And they'll be paid $12.25 per hour, per the Labor Department petition, an hourly rate that some in the past have criticized is not a livable wage.

This won't be the first time that a Trump business sought foreign labor to run its operations, though. In July, 2018, Labor Department data showed that Trump's Mar-a-Lago Club was looking for 78 foreign employees for its kitchen, restaurant, and housekeeping needs, The Washington Post reported.

In spite of a disclaimer on the Trump Winery website stating that it is "a registered trade name of Eric Trump Wine Manufacturing LLC, which is not owned, managed, or affiliated with Donald J. Trump or any of his affiliates," Trump suggested that he was the owner of the company in comments to the press in 2017.

While there have been no reports of abuse at the Trump Winery, the federal H-2 visa program itself is reportedly plagued with many problems, including ones involving workplace harassment.

In fact, it was the focal point of an extensive 2015 BuzzFeed News investigation which claimed that the federal H-2 visa program was often abused by American employers who sought cheap labor for exhausting and menial tasks. In some cases, migrant women who worked under the program highlighted verbal and sexual harassment by their employers, the website reported.

Perhaps Trump's previous comments may explain why his son's winery is looking for foreign workers. In 2015, Trump talked about the foreign labor employed at Mar-a-Lago for seasonal work and how his businesses heavily relied on such a workforce.

"We have to bring people in, which tells you, I mean, you can have jobs out there in certain communities that are doing well," Trump said in an interview with Broadcasting & Cable. "But in Palm Beach, [Florida], getting help during the season is almost impossible. So, we go through a very legal process and bring people in through legal visas."

The then-Republican presidential candidate added that it was apparently "very, very hard" to get American labor for seasonal work since it was limited to particular projects and durations. In other words, once the contract was over, the employee would be out of work, which may discourage some people from applying in the first place.