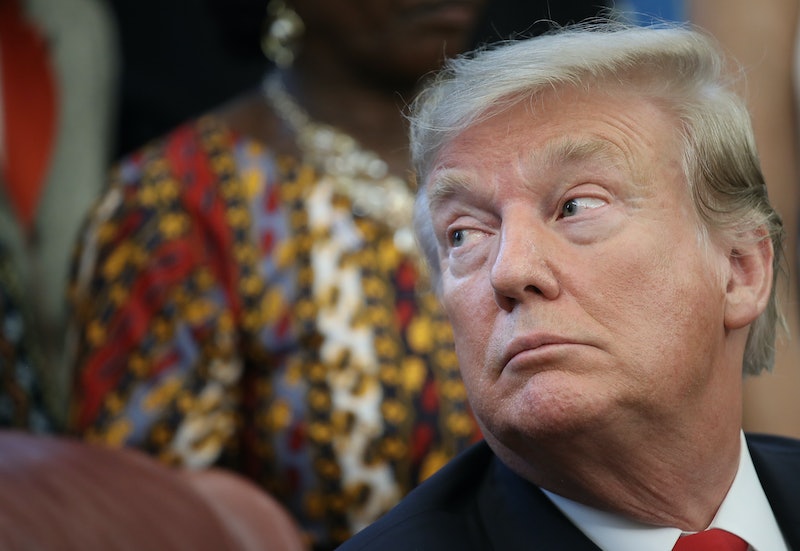 The president underwent his second physical examination in office on Friday, and while it didn't draw nearly the kind of attention as his first one did, the results were eagerly awaited regardless. President Trump's 2019 physical exam results showed that he is in "very good health," according to a letter from his physician that the White House released late Friday, but the full results of his physical haven't yet been released.

"While the reports and recommendations are being finalized, I am happy to announce that the President of the United States is in very good health and I anticipate he will remain so for the duration of his presidency, and beyond," White House physician Dr. Sean Conley wrote in a letter to White House Press Secretary Sarah Huckabee Sanders.

The 72-year-old president flew to Walter Reed Medical Center in Maryland on Friday for the exam, according to the Independent. Conley said that "11 different board certified specialists" aided him in his four-hour examination of the president, and that Trump didn't undergo any procedures requiring sedation or anesthesia during the physical.

The law does not require presidents to undergo any minimum number of physical exams while in office, nor does it obligate them to release the records of any physicals they do have. According to the Washington Examiner, Trump's immediate four predecessors all had between four and six physicals each while in office.

In 2018, Trump's physical was conducted by Dr. Ronny Jackson, who gave Trump a clear bill of health and infamously declared that the president is in "excellent health" and has "incredible genes." Jackson is no longer the White House physician, serving instead as an adviser to the president on medical policy.

Because the full results of Trump's 2019 physical haven't been released, the precise state of his health is unclear. In 2018, Jackson noted that the president has a history of "elevated cholesterol" and that although he's generally in good health, "he would be healthier if he lost a few pounds," and that "we’re going to try to" have him do that.

It's not yet clear if the president lost any weight over the course of last year. However, White House Deputy Press Secretary Hogan Gildey told CNN shortly before Trump's most recent exam that, although the president "received a diet and exercise plan last year after his annual physical," he "has not followed it religiously."

Trump's 2018 health results drew scrutiny on several counts. His reported height and weight — 6'3" and 239 pounds — put his Body Mass Index (BMI) at 29.9, indicating that he was overweight, according to the Centers for Disease Control. However, many pointed out that conveniently, this put Trump just one pound below the height and weight threshold at which he'd be considered obese.

More broadly, some took issue with Jackson's characterization of the president's health as "excellent." In addition to Trump's BMI indicating that he's overweight, the full results that Jackson released also showed that Trump has a common form of heart disease that, according to the Mayo Clinic, puts him at moderate risk of suffering a heart attack before the end of his presidency.

Despite this, Jackson said at the time that Trump "might live to be 200 years old" if he improved his diet. On Friday, a former White House physician told CNN called Jackson's assessment of Trump "an embarrassment to military medicine."