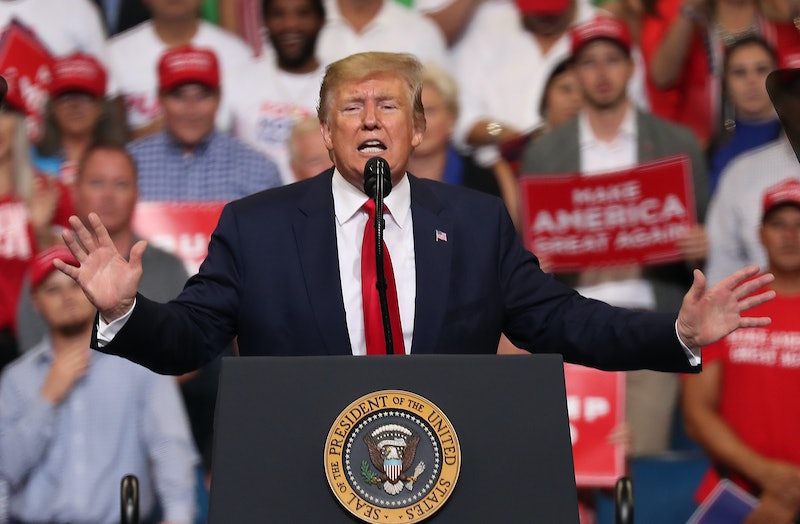 The president kicked off his 2020 reelection campaign at a characteristically boisterous rally in Florida on Tuesday night. During his remarks, he made his way through a lot of his usual talking points — touching on issues like border security and the economy. But nestled among some of his regular hits, Trump's abortion comments at the campaign launch struck a particularly pernicious tone, as he pushed falsehoods about not only the procedure, but Democrats who support it.

"Leading Democrats have even opposed measures to prevent the execution of children after birth," Trump said, according to video footage. "You saw that in Virginia."

Trump was referencing comments made by Virginia Gov. Ralph Northam over the winter. Northam, who is a pediatrician, appeared on local radio station WTOP at the time to discuss a piece of proposed legislation in his state, which was aimed at making it easier for people to obtain abortions in their third trimester. During his appearance, Northam said that an "infant would be resuscitated if that's what the mother and the family desired, and then a discussion would ensue between the physicians and the mother."

Trump and many other Republicans immediately latched on the comments, levying accusations that Northam and other Democrats supported the execution of newborn babies, in the interest of being pro-choice. This is entirely false.

Not only is executing children already illegal, but no politician with any clout has proposed or expressed even a modicum of support for such an idea. However, as debates around abortion access once again rear their head in American political discourse, the president seized on the talking point during his Tuesday night rally.

Some reproductive rights groups responded to the president's remarks, arguing that they were inaccurate and meant to stir drama. Among those were NARAL and Planned Parenthood.

"Not only are these lies medically inaccurate, but they incite violence and hatred," Tarina Keene, executive director at NARAL Pro-Choice Virginia tells Bustle in an email. "Any doctor can tell you that is simply not how abortion works. These disgusting anti-choice lies and rhetoric have real consequences, that could harm women’s health and lives and lead to real tragic consequences."

"Don’t get manipulated by propaganda and misinformation," Planned Parenthood tweeted Tuesday night. "Trump’s claims about abortion later in pregnancy are not true. This is a manufactured controversy."

Trump's comments come as a multitude of states have taken steps to limit abortion access within their borders. A multitude of abortion bans have sprung up in recent years, and especially so in recent months. Many of their supports have been upfront about the fact that they are ultimately seeking to re-challenge Roe v Wade before the Supreme Court, with the goal of outlawing abortion wholesale.

As Republicans have zeroed in on limiting abortion access yet again, Trump has helped pick up the mantle. "Republicans believe that every life is a sacred gift from God," he said to cheers during his Tuesday rally, immediately following his initial abortion remarks.

Trump's remarks also missed the reality that late-term abortions are extremely rare. Generally, they are performed in dire circumstances, such as when a woman's health or life is in danger, or else when a serious fetal abnormality is present.

And in the event that a baby is delivered even in light of such a severe abnormality, the AP notes that parents are generally given the option to provide comfort care. This kind of care would be performed if the baby is unlikely to live, and would aim to make the newborn as comfortable as possible while it dies naturally, in lieu of potentially invasive and possibly futile attempts to preserve life. Such decisions are not made lightly.