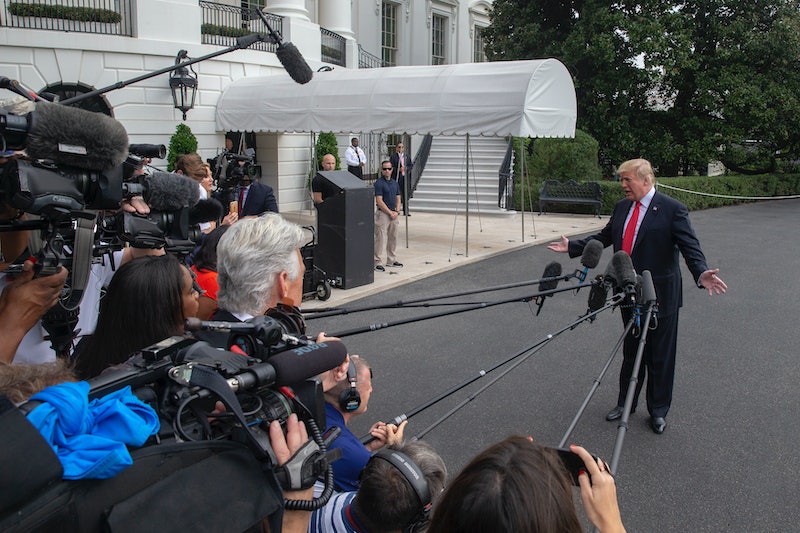 President Donald Trump has called the free press a number of things during his short career in politics: disgusting, the enemy of the people, and the phrase heard 'round the world, fake news. He has even characterized journalists as "horrible, horrendous people." But now, Trump's attacks on the media could come back to bite him in court; a literary and human rights organization is suing him for apparently punishing the media over coverage he does not like. Bustle has reached out to the White House for comment.

The organization, PEN American Center, which has denounced Trump as a bully and user of hate speech in the past, filed a lawsuit on Tuesday in Manhattan's federal court, The Washington Post reported. The group, which has thousands of authors and journalists as members, is accusing Trump of taking “official acts” that “violated the First Amendment and his oath to uphold the Constitution.” PEN alleges that the president tried to retaliate what he saw as unfair coverage by involving himself in the business affairs of different media organizations.

“President Trump has First Amendment rights and is free to criticize the press vehemently, but he is not free to use the power and authority of the United States government to punish and stifle it,” the complaint reads.

According to the Washington Post, PEN listed examples to make their case, including Trump's role in the proposed merger of AT&T and CNN, an outlet that the president has often maligned. The Justice Department has sued to block the merger. Trump has also made threats to take antitrust action against Amazon for The Washington Post's coverage of him. (Both are headed up by Jeff Bezos.)

"To be sure, a good portion of President Trump’s verbal attacks on journalists and news organizations might be considered fair game in this bare-knuckled political moment," wrote Suzanne Nossel, the executive director of PEN America, in a piece for Politico. "Although the president can launch verbal tirades against the press, he cannot use the powers of his office to suppress or punish speech he doesn’t like. When President Trump proposes government retribution against news outlets and reporters, his statements cross the line."

But what PEN America is after isn't money. The group wants the president to be prohibited from “directing or ordering any officer, employee, agency, or other agent or instrumentality of the United States government to take any action against any person or entity with intent to retaliate against, intimidate, or otherwise constrain speech critical of him or his Administration.”

The only cost the organization wants from the lawsuit is attorneys' fees and whatever other relief or action the judge sees fit, the Washington Post noted.

Trump is certainly no stranger when it comes to lawsuits. He has been sued more times than there are minutes in a day, the Post reported, with thousands of suits against him throughout his life. According to one USA Today report, Trump has been involved in more than 3,500 lawsuits, as both a defendant and plaintiff. Since becoming president, he's been sued dozens more times, the LA Times noted. This current lawsuit isn't the first to challenge the president on First Amendment grounds, but it's certainly the first of its kind to make this particular argument.