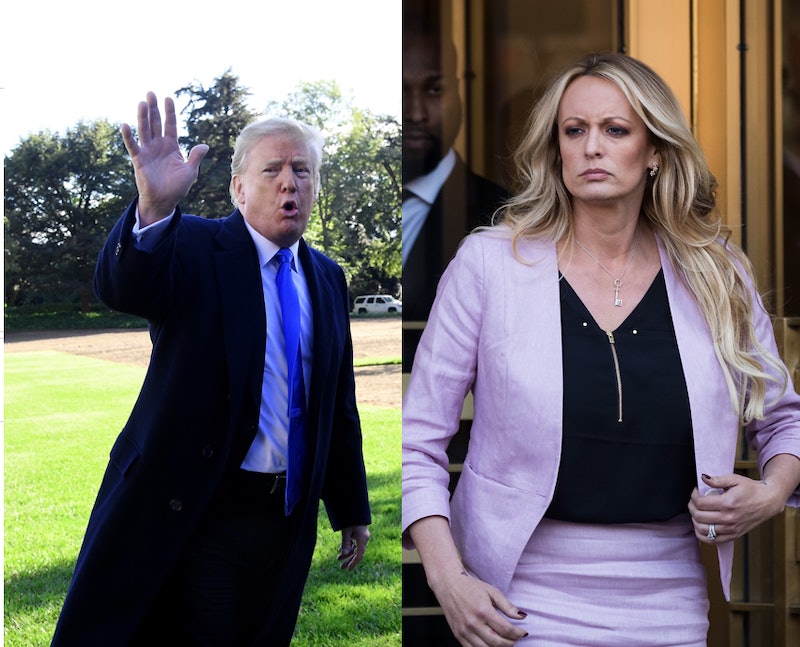 After a federal judge dismissed a defamation lawsuit against him, Donald Trump's attorney said Stormy Daniels' case getting dismissed was a "total victory" for the president. In his decision, the judge also ordered Daniels (whose given name is Stephanie Clifford) to pay Trump's legal fees.

"No amount of spin or commentary by Stormy Daniels or her lawyer, Mr. Avenatti, can truthfully characterize today's ruling in any way other than total victory for President Trump and total defeat for Stormy Daniels," Charles Harder said in a statement emailed to The Washington Post.

"The amount of the award for President Trump's attorneys' fees will be determined at a later date," Harder added, according to CNN.

The basis of the lawsuit begins with Daniels' allegation that she had an affair with Trump in 2006. Daniels says an unidentified man threatened her to keep quiet about the alleged affair about five years later, in 2011.

NBC News reported that Daniels and a sketch artist created a drawing of the man in April. In response, Trump tweeted later in the month: "A sketch years later about a nonexistent man. A total con job, playing the Fake News Media for Fools (but they know it)!" Daniels alleges that Trump defamed her via that tweet, according to The Guardian.

The judge ruled that this tweet was protected speech under the Constitution, according to NBC News.

"The Court agrees with Mr. Trump's argument because the tweet in question constitutes 'rhetorical hyperbole' normally associated with politics and public discourse in the United States" District Judge S. James Otero wrote in his opinion. "The First Amendment protects this type of rhetorical statement."

Otero added that "if this court were to prevent Mr Trump from engaging in this type of 'rhetorical hyperbole' against a political adversary, it would significantly hamper the office of the president. Any strongly-worded response by a president to another politician or public figure could constitute an action for defamation."

You can read the judge's full opinion via CNN.

Monday's ruling is separate from another lawsuit between Daniels and Trump. Daniels is also suing Trump and his former attorney Michael Cohen over the nondisclosure agreement relating to a $130,000 hush payment to Daniels. She claims it was intended to keep her quiet about the alleged affair with Trump before the 2016 election.

As for what comes next, Avenatti told NBC News that Daniels will be appealing the decision, tweeting screenshots of the appeal he filed. "Here is the Notice of Appeal we just filed with the Ninth Circuit relating to the defamation claim against Trump," Avenatti wrote. "His record before the Ninth Circuit has been anything but good. #Basta."

Avenatti also tweeted about the decision on Monday, saying that he is still pursuing Daniels' second lawsuit against Trump — and that the president should be worried.

"Be clear - even assuming Trump is owed attys fees from the defamation case (if he wins the appeal), they will be dwarfed by the fees he and Cohen will be required to pay in connection with the NDA case," Avenatti wrote on Twitter. "Not even close. Yet more 'winning' from Trump."