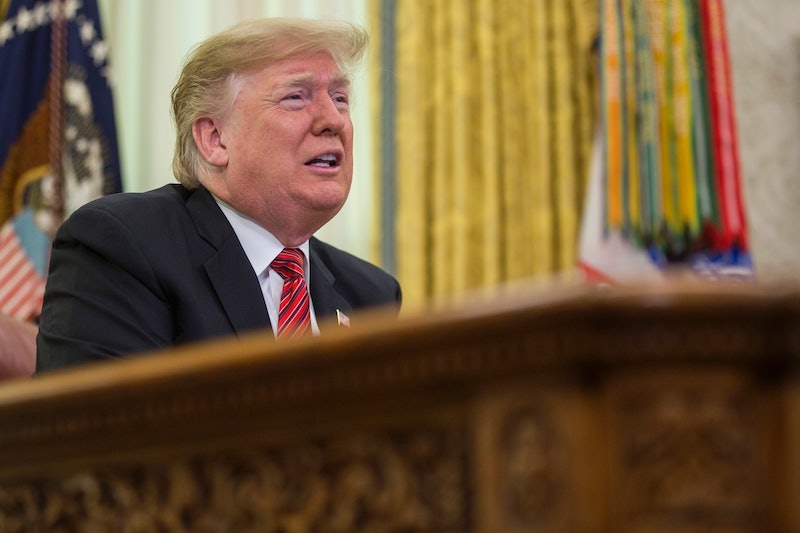 The hundreds of thousands of federal employees furloughed or working without pay over the holiday due to the partial government shutdown shouldn't expect to find a quick end to the closure under their Christmas tree, according to President Donald Trump. Indeed, Trump's Christmas Day comments about the government shutdown show he's unlikely to budge on his demand for a border wall.

"I can't tell you when the government is going to be open," Trump said Tuesday (via video from NBC News) while speaking to reporters in the Oval Office after making his traditional Christmas phone calls to troops. "I can tell you it's not going to be open until we have a wall, a fence, whatever they'd like to call it. I'll call it whatever they want but it's all the same thing."

Parts of the federal government shutdown at midnight on Friday after President Trump and congressional leaders failed to agree on a spending bill that would have prevented crucial funding from lapsing. While Congress had appeared set to fully pass a Senate-approved bipartisan spending bill, Trump's announcement that he'd veto any measure that didn't include the billions he'd demanded in border security funding effectively killed the legislation before it could be put to a vote in the House.

In a last-minute effort to avoid a shutdown and appease Trump, House Republicans pushed through a stopgap funding measure late last week that allocated $5.7 billion for Trump's border wall but that ultimately failed to gain traction in the Senate, according to CNN. Since then, budget talks between Trump and congressional Democrats like Senate Minority Leader Chuck Schumer and House Minority Leader Nancy Pelosi appear to have been largely unsuccessful as both sides dig in.

According to CNN, Trump also suggested that many furloughed federal employees supported his demand for border wall funding. "Many of those workers have said to me, communicated, stay out until you get the funding for the wall," Trump said Tuesday in the Oval Office. "These federal workers want the wall. The only one that doesn't want the wall are the Democrats, because they don't mind open borders. But open borders mean massive amounts of crime."

With no spending deal in sight, Senate Majority Leader Mitch McConnell adjourned the Senate and sent legislators home for the holiday on Saturday with no plans to return to legislative business until Thursday, The New York Times reported. But some, including acting White House Chief of Staff Mick Mulvaney, have said the shutdown could extend into the New Year.

"I don't think things are going to move very quickly here the next couple of days," Mulvaney said Sunday during an interview on Fox News Sunday. "It's very possible this shutdown will go beyond the 28th and into the new Congress."