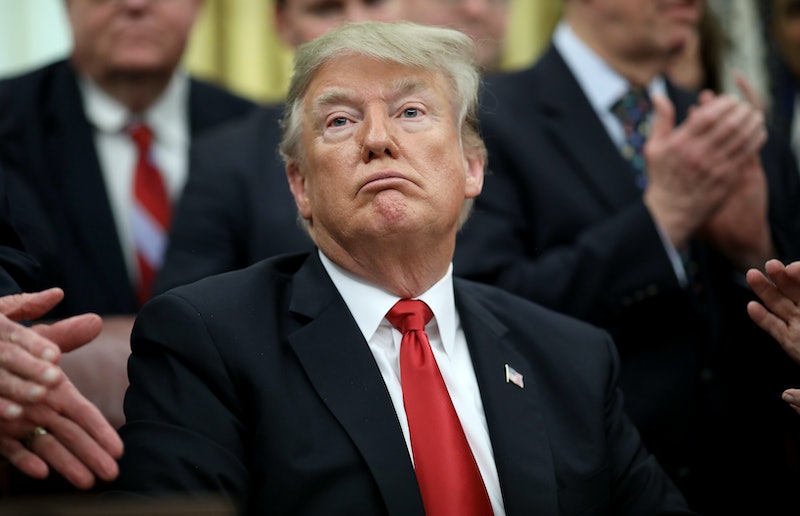 President Donald Trump kicked off his Christmas Eve with a slew of tweets. Indeed, Trump's Christmas Eve tweetstorm read like a lengthy list of grievances. There were those he felt had wronged him, complaints about the country's central banking system, and attacks on the so-called "Fake News Media." In short, it was a Christmas tweet feast, Trump style.

Forced to cancel his plans for a 16-day holiday getaway at his private Mar-a-Lago resort in Palm Beach, Florida, due to the partial government shutdown, the president launched his Christmas Eve tweetstorm early Monday with some harsh words for congressional Democrats. "Virtually every Democrat we are dealing with today strongly supported a Border Wall or Fence," he tweeted. The president then went on to argue that Democrats were only opposing a border wall because he'd made it a part of his campaign. "It was only when I made it an important part of my campaign, because people and drugs were pouring into our Country unchecked, that they turned against it," he wrote.

A few minutes later, Trump was back, this time slamming any senator who'd accused him of not appreciating the United States' foreign allies. "To those few Senators who think I don't like or appreciate being allied with other countries, they are wrong, I DO," Trump wrote.

The president went on to say he didn't like when these allies "take advantage of their friendship with the United States" through military protection and trade deals. Without offering proof, Trump claimed "many VERY rich countries all over the world" were taking "total advantage" of U.S. taxpayers on trade while the United States "substantially subsidized" their militaries.

"General Mattis did not see this as a problem," the president tweeted. "I DO, and it is being fixed!"

But it wasn't just Democrats and Mattis that Trump took fault with in his Christmas Eve tweetstorm. The president also bemoaned outgoing Republican Sen. Bob Corker and Brett McGurk, the U.S. envoy to the coalition fighting the Islamic State in Iraq and Syria (ISIS) who, according to CNN, resigned Saturday in protest of Trump's decision to withdraw troops from Syria.

"For all of the sympathizers out there of Brett McGurk remember, he was the Obama appointee who was responsible for loading up airplanes with 1.8 Billion Dollars in CASH & sending it to Iran as part of the horrific Iran Nuclear Deal (now terminated) approved by Little Bob Corker," Trump tweeted.

Trump and Corker have recently clashed over Trump's Syria decision and the government shutdown. Corker told CNN on Sunday that he thought Trump's refusal to sign a budget deal that didn't include billions in border wall funding was "juvenile" and "a purposefully contrived fight." Trump responded by claiming that it was his refusal to endorse Corker that led the senator not to run for re-election.

"Yes, just like Mexico is paying for the wall... #AlertTheDaycareStaff," Corker tweeted Sunday in response.

On Monday, Trump continued his tweetstorm by lashing out at the Federal Reserve, calling the central banking system "the only problem our economy has." The president accused the Fed of not having "a feel" for the market and failing to understand trade wars or government shutdowns. "The Fed is like a powerful golfer who can't score because he has no touch - he can't putt!" Trump tweeted.

Trump also accused the media of fabricating reports that he'd "lashed out" at Acting Attorney General Matthew G. Whitaker and declared that "AMERICA IS RESPECTED AGAIN!"

The president appeared to end his Christmas Eve tweetstorm by circling back to Democrats. "I am all alone (poor me) in the White House waiting for the Democrats to come back and make a deal on desperately needed Border Security," Trump tweeted.