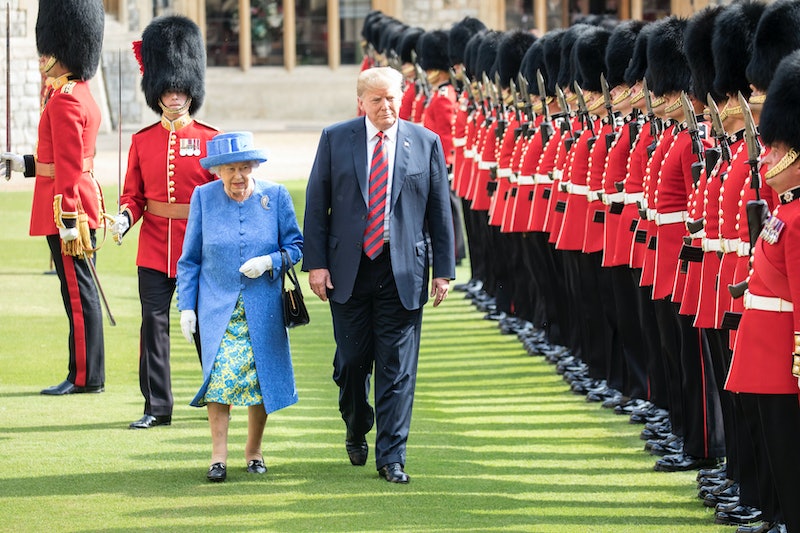 As anyone familiar with the British monarchy (hey, watching The Crown counts) knows, meeting a member of the royal family involves adhering to a set of strict rules of decorum. Last week, breaking with tradition and standard protocol, Trump discussed his meeting with Queen Elizabeth in an interview with Piers Morgan aboard Air Force One.

"It was a very easy talk," he told Morgan of his conversation with the queen, according to Morgan's report in The Daily Mail. "You know, it’s hard to talk to somebody if you’re, sort of, if there’s not that something special... We had a great, a great feeling."

When Morgan asked Trump if the queen had any thoughts on the U.K.'s Brexit negotiations, Trump dished a little. "She said it’s a very — and she’s right — it’s a very complex problem. I think nobody had any idea how complex that was going to be. ... Everyone thought it was going to be 'Oh it’s simple, we join or don’t join, or let’s see what happens...'"

When pressed, however, Trump acknowledged he wasn't supposed to be discussing his talks with the queen. "Well, I can’t talk, you know I’ve heard very strongly from a lot of people, you just don’t talk about that conversation with the queen, right? You don’t want to do that."

The royal family is historically apolitical, and according to its website, as head of state, the queen "has to remain strictly neutral with respect to political matters." From what Trump told Morgan about his conversation, it does not appear that the queen admitted to having a personal opinion about the Brexit process. However, according to Time, the royal family has remained silent on the issue since the 2016 referendum vote, making her comments all the more unusual.

During his visit on Friday, Trump was also criticized for not bowing to the queen, and for walking ahead of her during their visit, both apparently departures from tradition when meeting a British monarch.

According to the royal family's website, "there are no obligatory codes of behavior" when meeting the queen, but traditionally, men will address her with a neck bow, from the head only, and women will do a small curtsy. After arriving to Windsor Castle a few minutes late — another no-no —neither the president nor first lady Melania Trump opted for the traditional deferential greetings during their visit.

According to the BBC's guide on royal etiquette, one is also never supposed to turn one's back on the queen, which Trump subsequently did by walking ahead of her as they inspected her honor guard at Windsor Castle. She caught up quickly and the entire faux pas was over in less than 20 seconds, but the Twitter ire was just beginning. For many, Trump's break with traditional behavior around the queen wasn't so much about the transgression itself, but rather his disregard — even disrespect — for foreign customs and norms.

The same day, some 250,000 people took to the streets of central London to protest Trump's visit to the United Kingdom. When Morgan asked Trump about the protests, the president replied, "Some of them are protesting in my favor, you know that? There are many, many protests in my favor." While a handful of pro-Trump rallies were organized in the U.K. last week, Huffington Post reported that they were dwarfed in number and size by the anti-Trump demonstrations.

"I think it’s important to send a message to our brothers and sisters here in the U.K. and around the world that not all Americans support this president," Michael Avenatti, lawyer to Stephanie Clifford (also known as Stormy Daniels), told BBC. "There’s millions of Americans that are outraged by his conduct and by his behavior."