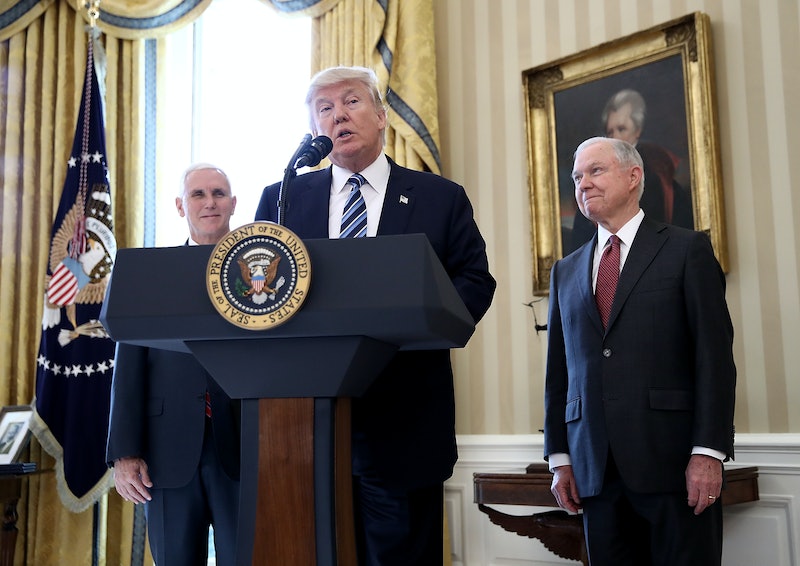 On Thursday morning, Donald Trump announced that he would be signing three new executive orders "designed to restore safety in America." The text of these orders was not available as of this writing, but CNBC reports that the orders are targeting "gang members, drug dealers, drug cartels [and] crimes against law enforcement officers." However, his orders seem to ignore the statistics of officer deaths and violent crimes in the United States.

In his announcement, delivered shortly after Jeff Sessions was sworn in as Attorney General, Trump described the objective of the orders, saying that cartels are "destroying the blood of our youth."

Trump did not say what, precisely, is happening to law enforcement officers, but it seems likely he is referring to an alleged spike in police officer deaths, since he referred to this during his RNC speech and at other moments during his campaign. However, while police deaths did rise in 2016, as my colleague Alexi McCammond notes, officer deaths have actually decreased overall during the past decade. According to the National Law Enforcement Officers Memorial Fund, for example, in 2005, 163 officers were killed in the line of duty; in 2015, that figure lowered 123.

Even the journalist that Trump cited for his figure about rising police deaths wrote in Newsweek that Trump's use of the data was inaccurate: "[Trump] got it wrong."

The death of any police officer in the line of duty is tragic, of course, but Trump's picture of a terrifying rise in police deaths is not historically accurate. It's also part of a greater effort by the president to promote an image of a nation overcome with violent crime; this account is not borne out by statistics.

For example, on Tuesday, Trump made a completely untrue claim that he's repeated before:

The murder rate in our country highest it's been in 47 years, right? Did you know that? 47 years — I used to use that, I said that in a speech and everybody was surprised. Because the press doesn't tell it like it is.

It's more likely that "everybody was surprised" because that figure is completely inaccurate. The murder rate in the United States, according to FBI Uniform Crime Reports, is actually close to a 45-year low. These discrepancies are deeply concerning. The president should not be reporting false or questionable crime statistics. Trump's administration has previously cited made-up terrorist attacks in order to justify policy, and it seems like these questionable numbers on crime will be used to justify Thursday's executive orders.