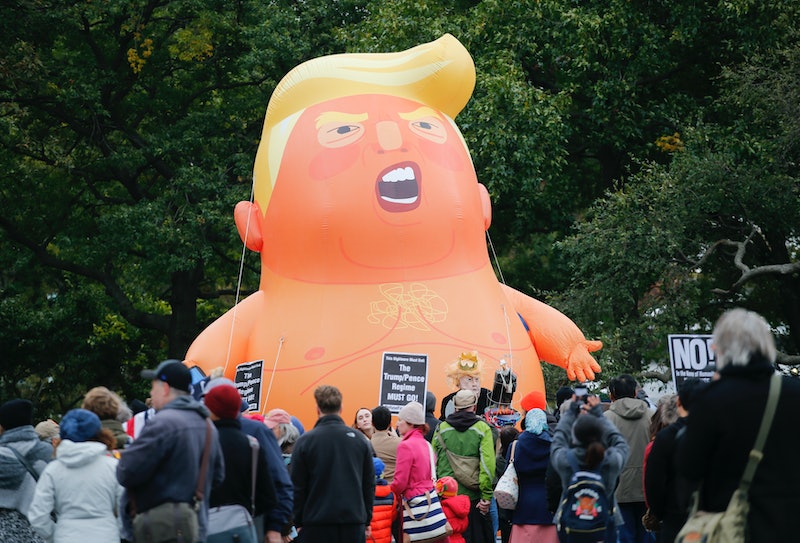 President Donald Trump's first campaign rally of the year is going to have an unexpected visitor. Donors raised enough money to bring the Baby Blimp to Trump's El Paso, Texas campaign rally on Monday. The rally will be held "less than 1,000 feet" from part of the southern border fence in the Texas border city, according to Trump's campaign manager.

The campaign to bring the Trump Baby Blimp to Texas began on GoFundMe, where organizers were requesting $3,500 to make the trip happen. (The blimp was previously in California, according to organizers.)

The fundraiser exceeded its goal "within 14 hours," according to organizers. In total, the fundraiser earned $4,086 before organizers stopped accepting donations. Extra donations will given to the Annunciation House, an organization that supports migrants and refugees, in El Paso.

The Trump Baby Blimp will be on display at Chalio Acosta Park as a part of the March for Truth counter protest, according to an update on the GoFundMe campaign. The rally will feature Democratic Congresswoman Veronica Escobar as well as her predecessor, former congressman Beto O'Rourke, according to The Washington Post.

The blimp began as a protest in 2018 when Trump visited the United Kingdom. It's about 20 feet tall, according to The Washington Post. While the president's first visit to the United Kingdom was marked by many protests, the blimp was a different kind of protest. CNN reported that about 2,000 people watched the Trump Baby Blimp fly roughly 98 feet above Parliament Square in London during the July 2018 visit. It flew for two hours, according to the network.

The balloon was designed to talk to the president ""in a language that he understands, which is personal insults," activist and blimp organizer Leo Murray explained to CNN back in 2018. "This is how most of the world sees Donald Trump, certainly most British people. It's a popular perception that he is a big angry baby. Anytime something doesn't go the way he likes he chucks his toys out of the pram."

The Guardian reported in October that the Trump Baby Blimp first flew in California as a part of Politicon. Additionally, replicas of the Trump Baby Blimp have been flown at a rally in Florida to support Hurricane Maria recovery efforts in Puerto Rico in September, according to The Hill. But that's not all — the baby blimp has also been flown outside Trump's golf courses in New Jersey, NJ.com noted.

Trump hasn't been the only target of the blimp. A version of the blimp flew outside a speech given by Vice President Mike Pence in Spokane, Washington in October.

Trump's rally is Monday afternoon in El Paso. It's unclear if Trump will acknowledge the protest.