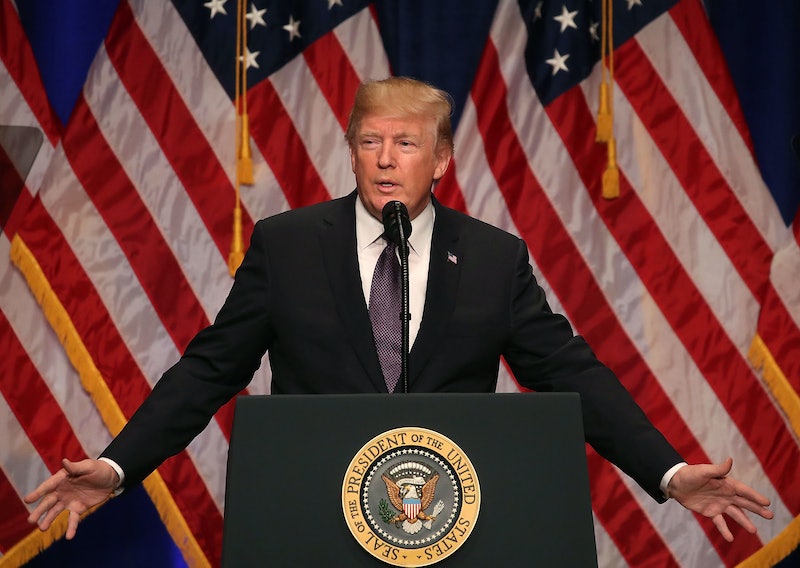 After weeks of hype and several delays, President Trump finally announced the winners of his "Fake News Awards" on Wednesday — sort of. The awards were intended to honor (read: shame) news organizations that Trump has felt slighted by, and he finally tweeted out a link to a list of the winners on Wednesday evening. The problem: Trump's "fake news awards" linked to a 404 error on the official GOP website, leading many to suggest that the mere prospect of the "fake news awards" was, in itself, fake news.

"I will be announcing THE MOST DISHONEST & CORRUPT MEDIA AWARDS OF THE YEAR on Monday at 5:00 o’clock," Trump tweeted on Jan. 2nd in his initial announcement. "Subjects will cover Dishonesty & Bad Reporting in various categories from the Fake News Media. Stay tuned!" However, the president then postponed the awards, explaining in a subsequent tweet that "The Fake News Awards, those going to the most corrupt & biased of the Mainstream Media, will be presented to the losers on Wednesday, January 17th, rather than this coming Monday."

"The interest in, and importance of, these awards is far greater than anyone could have anticipated!," the president added. Finally, on Wednesday evening, the big moment came — and that moment consisted of Trump tweeting out a broken link. As of this writing, the link is still broken, and jokes are filling its absence.

The irony of a "fake news awards" link that didn't name any award winners was not lost on the Twittersphere.

A brilliant piece of meta-commentary, or just lazy website maintenance? You be the judge!

The only way this could have been more of a rickroll is if it had been a literal rickroll.

Was Trump being ironic? Is this tweet ironic? What is irony anymore, really?

It's really like a snake eating its own tail, isn't it?

But What About When Obama Did It?

Here's one of many, many tweets that Trump sent criticizing Healthcare.gov for the problems it experienced upon launch. At one point, he accused the contractor who built Healthcare.gov of "obvious incompetence" and called for the person who hired them to be fired. This, of course, begs the question of how Trump feels about the fiasco that plagued the fake news award website on Wednesday.

Well, what do you know? Someone actually managed to squeeze some legitimate insight out of the "fake news awards" disaster. Impressive!

When Trump was sending a broken link to his "fake news awards" winners, Congress was a little more than 48 hours away from a possible government shutdown. So, there's that.

Okay, the "fake news awards" flop wasn't exactly the same as the time they gave the Best Picture award to the wrong movie at the 2017 Oscars. But it was in the same ballpark.

Really, guys? This is worse than the original error message, which at least had the decency not to display raw code.

...that doesn't mean you can't make America great again! Well, according to Trump.

This Will Definitely Happen

The "fake news awards" website eventually began working for some people. Trump gave the most honors to CNN, a favorite target of the president, which was given four "awards" for its coverage. The New York Times was given two "awards," while the Washington Post, ABC News, Newsweek and TIME all scored one each. Trump ended his post with a proclamation that "Russian collusion is perhaps the greatest hoax perpetrated on the American people."

"THERE IS NO COLLUSION!," the president added for good measure. Trump is currently under investigation for possible collusion with the Russian government.