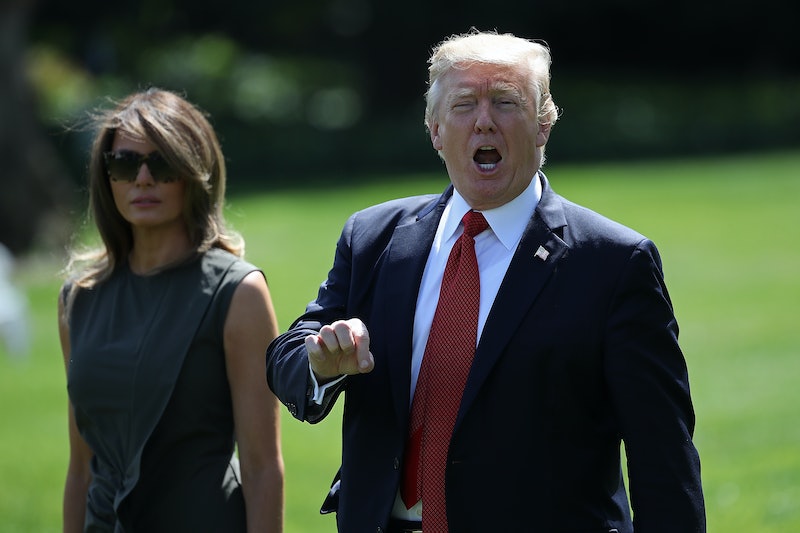 If anyone had any doubts about how President Trump feels about the news media, they probably evaporated this month when the president announced that he'd be giving out "fake news awards" to the media organizations he doesn't like. The awards themselves were shrouded in mystery for weeks, and even the White House was unable to give any details about how the awards would work or what they might look like. But Trump followed through, and — after much delay and uncertainty — finally announced the "Fake News Awards" winners on Wednesday on the GOP's official website.

The website listed 10 awards that Trump was giving to news outlets he felt had mistreated him. Four of them went to CNN, often Trump's favorite punching bag, while the New York Times came in second with two awards. The rest of the "honors" went to the Washington Post, ABC News, TIME and Newsweek, each of which took home (not literally) one of Trump's awards.

"And last, but not least," Trump declared at the end of the announcement "'RUSSIA COLLUSION!' Russian collusion is perhaps the greatest hoax perpetrated on the American people. THERE IS NO COLLUSION!" This comment did not appear to be directed at any specific news organization, but apparently at news organizations in general. The FBI is investigating the Trump campaign for possible collusion with Russia during the 2016 election.

Trump initially floated the idea of a "fake news" awards ceremony way back in November, suggesting in a tweet that "We should have a contest as to which of the Networks, plus CNN and not including Fox, is the most dishonest, corrupt and/or distorted in its political coverage of your favorite President (me)." "They are all bad," Trump added. "Winner to receive the FAKE NEWS TROPHY!" The president confirmed on Jan. 2nd that he'd be announcing "THE MOST DISHONEST & CORRUPT MEDIA AWARDS OF THE YEAR" in six days, adding that the "Subjects will cover Dishonesty & Bad Reporting in various categories from the Fake News Media."

When asked for details the next day, White House Press Secretary Sarah Huckabee Sanders was unable to provide any. "I certainly don't want to spoil anything,” Sanders said at a press conference. “But my guess is that there are quite a few individuals that could be up for those awards...We'll certainly keep you posted. It might be hard for him to present trophies if you guys aren't there. But I don't know, we'll have to wait and see what happens.”

Then, a day before the awards were supposed to be announced, Trump abruptly postponed them. "The Fake News Awards, those going to the most corrupt & biased of the Mainstream Media, will be presented to the losers on Wednesday, January 17th, rather than this coming Monday," the president said. "The interest in, and importance of, these awards is far greater than anyone could have anticipated!"

Many people had expressed alarm at the prospect of a sitting U.S. president carving out time in his schedule to demean specific news outlets. In an op-ed for the Washington Post, Sen. John McCain said that Trump's "unrelenting attacks on the integrity of American journalists" makes it easier for repressive regimes around the world to crack down on the free press, and called on the president to "stop attacking the press:"

"[Trump] has threatened to continue his attempt to discredit the free press by bestowing 'fake news awards' upon reporters and news outlets whose coverage he disagrees with. Whether Trump knows it or not, these efforts are being closely watched by foreign leaders who are already using his words as cover as they silence and shutter one of the key pillars of democracy."

The "fake news awards" led Republican Sen. Jeff Flake, a frequent critic of the president, to compare Trump to the communist dictators who ran the Soviet Union during the Cold War. “It is a testament to the condition of our democracy that our own president uses words infamously spoken by Josef Stalin to describe his enemies,” Flake said in a floor speech. “It bears noting that, so fraught with malice was the phrase ‘enemy of the people,’ that even Nikita Khrushchev forbade its use." Trump had said in February the the news media was "the enemy of the American People!"

The awards hit a major hiccup, however, when the link that Trump tweeted led to a website that didn't work. An after hour it was posted, the website remained inaccessible for many users.