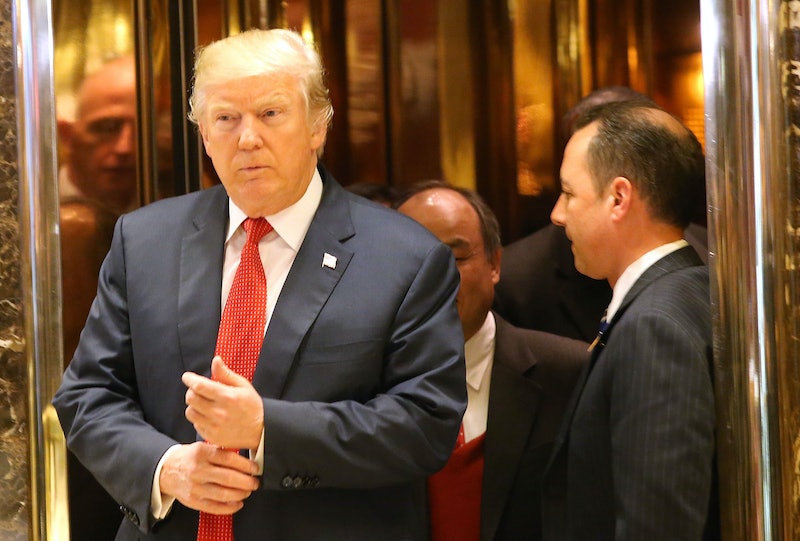 If there's one thing that Donald Trump has established over the years, it's that he's phenomenally rich. His name is emblazoned on buildings across the world, and his preferred interior design color scheme is a very shiny gold, as seen in Trump Tower and Mar-a-Lago. But since he's become president, Trump's Forbes 400 ranking has plunged, Forbes reported on Tuesday, with his net worth dropping by more than $1 billion since he announced his presidential bid in 2015.

Forbes, known for tracking America's richest figures, noted that his change in net worth resulted in a steep fall, down 138 spots on the latest The Forbes 400 list, which is expected to be released on Wednesday. Trump was listed at No. 248 last year and at No. 35 the year before that in 2016, The Hill reported. According to Forbes, Trump’s net worth sunk from $4.5 billion in 2015 to $3.1 billion, where the number has hovered for the past two years.

The finance magazine attributed the loss in net worth to a number of things, including his divisive politics and fickle real estate economics. The report noted that Nike abandoned its flagship store at Trump Tower earlier this year, and Ivanka Trump’s accessories business shuttered its doors as well.

Eric Trump, who co-manages the Trump Organization, defended his father in a statement to Forbes, saying, “My father made a tremendous sacrifice when he left a company that he spent his entire life building to go into politics."

“Everything he does is for the good of the American people — he has zero involvement in the Trump Organization and quite frankly to suggest otherwise is outrageous,” Eric added.

Another reason for Trump's tumble in the rankings is his time under the Oval Office spotlight. The president's past claims on his net worth have been scrutinized and investigated by journalists, who have reported that the president supposedly lied about his wealth.

One previous reporter for the Forbes 400 list, Jonathan Greenberg, wrote a column for The Washington Post, noting that it took decades to untangle the "elaborate farce Trump had enacted to project an image as one of the richest people in America." Greenberg said that in Forbes' inaugural 1982 list, the outlet had ranked Trump with a $100 million worth but it wasn't true — Trump was actually worth roughly $5 million, proven later by a number of government reports. The Washington Post piece said the White House declined to comment on the topic.

With the president's polarization of the country has come a polarization of his customer base. Forbes reported that Trump saw an estimated $200 million hit in his businesses as well as a 9 percent drop at his golf clubs during 2017.

The reality of the president's financial strategy is likely turning out to be nothing like the shoot-for-the-sky, presidential marketing strategy he seems to have been working on for years. After all, it was Trump, 18 years ago, who said to Fortune in 2000, “It’s very possible that I could be the first presidential candidate to run and make money on it.”