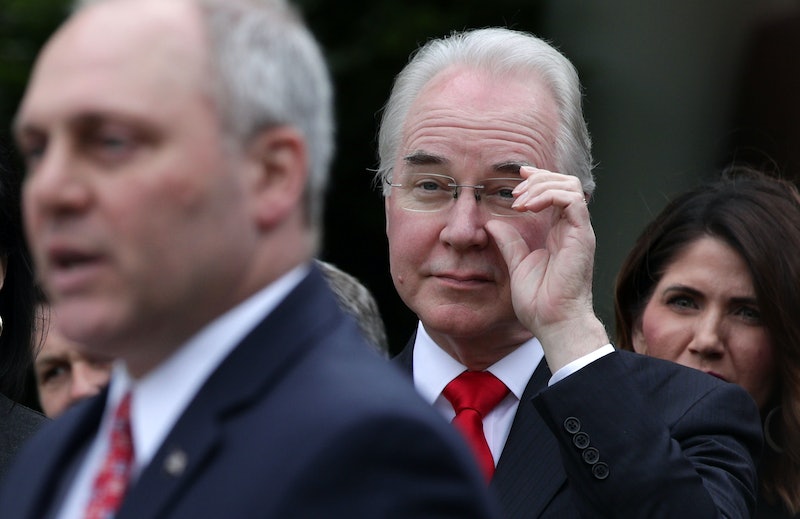 The job of a journalist is to bring the important and relevant facts of a story to their audience. In pursuit of this mission, most reporters discover the value and necessity of persistence — not every source will be willingly and immediately forthcoming. That persistence, however, appears to be what landed Dan Heyman of Public News Service in jail. On Tuesday, the reporter was arrested for asking Tom Price a question about the Republicans' health care bill too many times.

The details of his ordeal paint a picture of what press freedom is not. The question Heyman wanted answered was whether or not domestic abuse would be classified as a preexisting condition under the recently passed American Health Care Act (AHCA). As head of the Health and Human Service (HHS), Price is in a position to answer such a question. However, as Heyman followed Price through the West Virginia capitol with the question, Price allegedly ignored him. At a news conference about his arrest later on, Heyman explained, "[Price] didn't say anything. So I persisted." (Price was in West Virginia, alongside White House Special Counsel Kellyanne Conway, to address the opioid overdose crisis afflicting the state.)

Heyman stands accused of "causing a disturbance by yelling questions at Ms. Conway and Secretary Price." According to the official police complaint, Heyman was removed from the area more than once for "aggressively breaching" the Secret Service convoy surrounding the two. Heyman was charged with a misdemeanor, and had to pay $5,000 in order to be released from jail.

But Heyman's version of the events is different. Heyman reportedly said that he was holding his phone out to record any answer that Price might have — and to him, he was simply doing exactly what he's always done as a journalist:

Heyman had on his press badge and told police officers that he was a member of the press. Still, none of his credentials mattered. That should deeply trouble all Americans who understand the crucial role that a free press plays in upholding democracy. It is imperative that the press be legally protected, but it is equally vital that journalists don't sense a specter of threat hanging over the daily demands of their job.

For Heyman, asking a question one too many times, or just talking too loudly, became a punishable offense. And for the sake of democracy itself, that must not become a trend.

More like this
The Families Of Grenfell Tower Are Still Waiting For Justice, Five Years On
By Bustle UK
5 Concrete Ways To Take Action Against The Rwanda Deportation Plan
By Rachel Mantock
The Most Powerful Photos From The Weekend’s Abortion Rights Protests
By Melanie Mignucci
How To Fight For Reproductive Rights, Based On How Much Time You Have
By Courtney Young
Get Even More From Bustle — Sign Up For The Newsletter