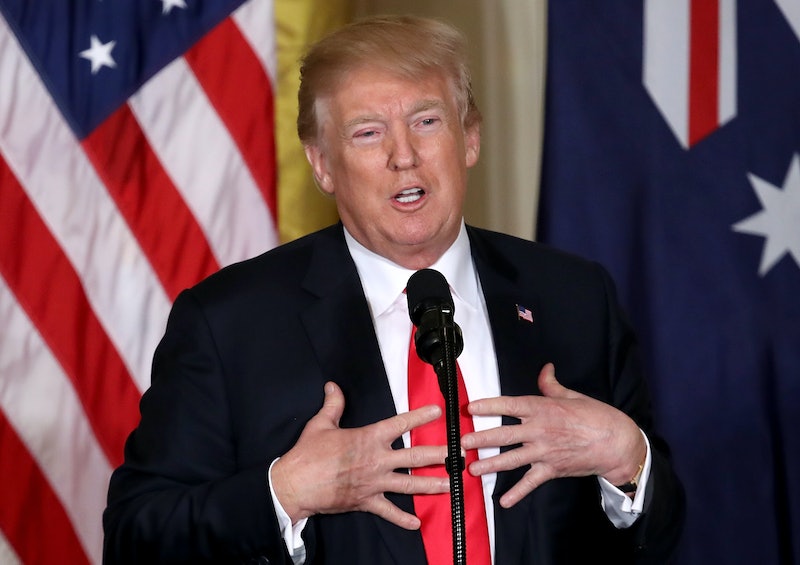 When he spoke to a group of governors at the White House on Monday, President Trump told the room that he would be a hero if he were faced with a school shooting. The president previously criticized an armed officer who didn't enter Marjory Stoneman Douglas High School when a gunman went on a shooting rampage there earlier this month, and Trump's latest Parkland shooting comment reveals that he believes he would have acted differently. The Hill reports that Trump said he'd "run in" during a school shooting, whether or not he was armed.

After 17 people died in the mass shooting at Stoneman Douglas, Trump advocated for arming teachers on the job. He wrote on Twitter that armed educators "love our students and will protect them," explaining that the decision should be left up to individual states. That same day, Trump defended his call to arm teachers by claiming that the armed resource officer who stayed outside the Parkland, Florida school didn't protect students because he "doesn't love the children."

As the president talked about the Florida shooting on Monday, he apparently told governors he would have ran into the school himself. "I really believe I'd run in there even if I didn't have a weapon," Trump said, according to The Hill.

The school officer criticized by Trump resigned from his position after he was suspended without pay. Trump continued to use the officer's name when talking about the shooting, calling him a "coward" and telling reporters he "certainly did a poor job."

Despite Trump's claims of personal bravery, though, people on Twitter were quick to point out that his track record might suggest otherwise. On top of calling out Trump's five draft deferments that kept him from serving in the Vietnam War, people also recalled that the real estate mogul didn't rush to the aid of those affected by the 9/11 terrorist attacks.

In fact, an interview with New Jersey's WWOR-TV on Sept. 11, 2001, reveals Trump bragging that the destruction of the World Trade Center meant his building was once again the tallest in New York City. He explained that the Trump Building on Wall Street used to be the tallest building in the city, "and then, when they built the World Trade Center, it became known as the second-tallest" — "and now it's the tallest," he added.

Based on the fact that Trump ran to call a news station rather than assist first responders during 9/11, some people had a hard time believing he would heroically run into a mass shooting with no weapon.

While on the subject of school shootings, Trump also brought up the National Rifle Association (NRA) at the governors' gathering on Monday. After saying he lunched with NRA leaders last week, Trump reportedly told the governors, "Don't worry about the NRA. They're on our side." The NRA put more than $21 million toward getting Trump elected in 2016, and he vowed to strongly defend the Second Amendment as president.

Trump's message on gun laws was somewhat unclear immediately following the Stoneman Douglas shooting earlier this month, but the White House said he's "open" to improving federal background check legislation. He is now championing the idea of arming teachers and giving bonuses to those who are trained to handle a firearm.

Studies suggest the "good guy with a gun" theory is a myth, as a 2013 FBI report on active shooter events says just 3 percent are stopped by a civilian with a gun.

Trump's comment that he would run to the aid of shooting victims might have been intended to bolster his claims that people with good intentions can stop school shootings, but it resulted in many raised eyebrows.