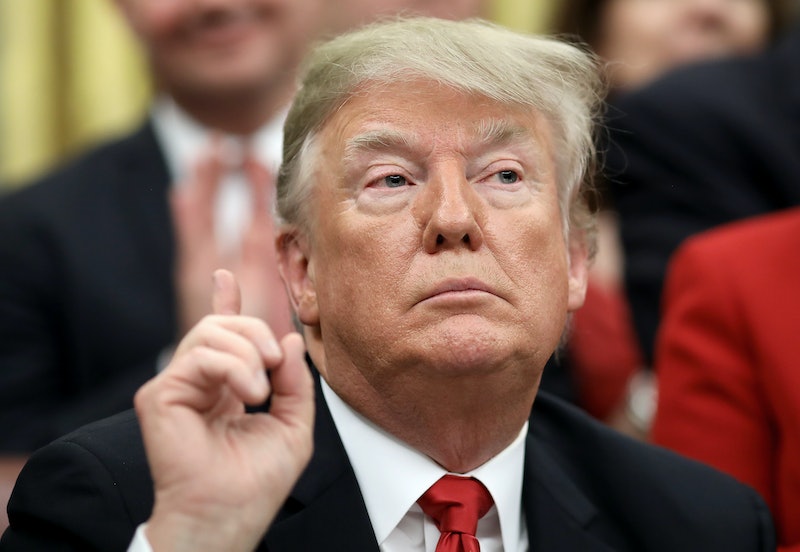 According to Politico's analysis of Trump's 2018 tweets, the president actually tweeted more about the economy than he did his border wall, the Russia probe, fake news, or even Clinton's emails. While the president argued about the need to "build the wall" in 336 tweets, railed against the Russian investigation in 310 tweets, and tore into what he calls the fake news with 225 tweets, he sent more than 360 tweets about the economy, according to Politico's count.

That includes tweets like those he sent on Jan. 17, in which he bragged that his economic policies and tax cuts had led Apple and Chrysler to bring money and jobs back to the United States. But it also includes more than 100 tweets in which the president lashed out at either a company or a person for reasons related to the economy. On June 26, for example, Trump attacked Harley Davidson for moving some of its plant operations overseas in a series of tweets. And who can forget the July 24 tweet, in which Trump boasted that "our Country is doing GREAT" and had the "best financial numbers on the Planet."

It's not altogether surprising that Trump's most tweeted topic was the economy. A series of economic gains like job growth and low unemployment rates top the White House's list of Trump administration achievements. In fact, in 2018, Trump often claimed his administration had built "the greatest economy in the HISTORY of America." But is Trump right to tout 1) himself as responsible for all economic gains and 2) brag about the economy as being "the greatest ever?"

According to The Washington Post, presidents never deserve sole credit for economic gains as the actions and decisions of consumers and businesses are often based on a lot more than just government decisions. What's more, the paper has also reported that Trump's claim of creating "the best economy this country has ever had" is one of his most repeated misleading claims.

"Trump can be pleased with the state of the economy but calling it the 'greatest ever' goes way too far," the paper has noted. The late 1990s and parts of the 1940s, 1960s, and 1980s reportedly saw better economic growth than we're seeing now, according to The Post. Wage growth is also down when compared with previous booms, the paper reported.

Making matters worse, according to The New York Times' David Leonhardt, is that inflation has surged — driven mainly by rising oil prices — meaning that the nominal-wage growth we have seen under Trump was actually countered by inflation to create a stagnation in real wages.

While Trump once promised to give up Twitter when he became president, his flurry of activity on the social media site this year lead many to believe that it'll be at least another two years of Trump tweets. That being said, what will Trump tweet about most in 2019?