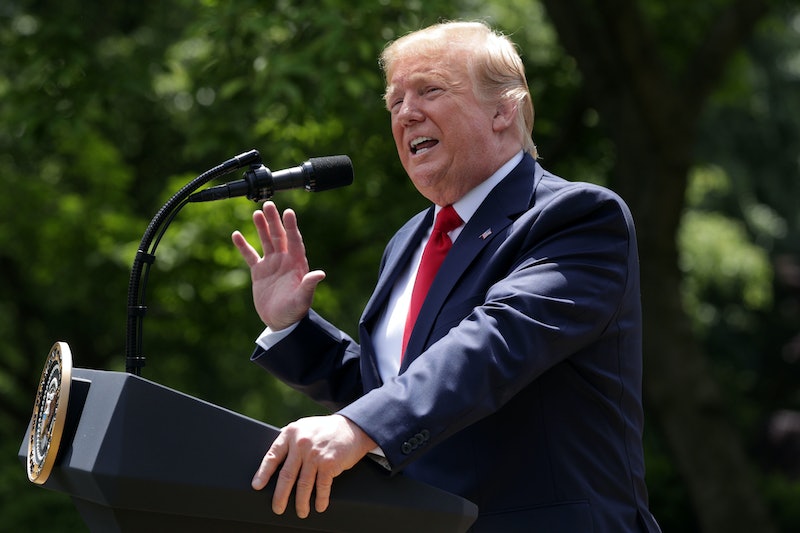 Ever since Donald Trump first launched his presidential bid in 2015, voters and lawmakers alike have demanded that he release his tax returns. Now, New York lawmakers are trying to use legislation to make that happen; according to NBC News, the New York state Senate voted on Wednesday to pass a bill that would facilitate the release of Trump's state tax returns to Congress.

New York state senators voted 39-21 to pass the bill, which is called the TRUST Act. Under this legislation, the chairmen of congressional tax-writing committees could request Trump's New York state tax returns from the state's department of taxation and finance, The Hill reported, as long as the request is backed up by a “specific and legitimate legislative purpose.” If they were to file such a request in New York, lawmakers would also need to prove that they are requesting related federal tax returns from the U.S. Treasury Department, per The Hill.

The TRUST Act could technically be applied to any state tax return, but Hoylman — a Democrat — made clear in a Wednesday statement that he had his eye on Trump's returns in particular.

“Donald Trump has broken forty years of political tradition by not releasing his tax returns,” Hoylman said, per HuffPost. “Now, his administration is precipitating a constitutional showdown by shielding the President from Congressional oversight over those returns. Our system of checks and balances is failing. New York has a special role and responsibility to step into the breach.”

According to HuffPost, Trump's state returns are expected to contain similar financial information to his federal returns. In a statement issued on Wednesday, House Judiciary Chairman Jerry Nadler confirmed this, noting that the New York bill offered "a workaround to a White House that continues to obstruct and stonewall the legitimate oversight work of Congress."

"The state return should generally match the federal return and obtaining it from New York State will enable us in Congress to perform our oversight function and maintain the rule of law," Nadler said in his statement, per HuffPost.

New York Gov. Andrew Cuomo told WAMC last month that he would sign the bill, NBC News reported, but only if it is applied to officials elected in the state. Republican critics of the bill have alleged that the bill is specifically targeting Trump, per NBC News, but Democratic lawmakers at both the state and federal level have made it clear that they are prepared to engage in a legal battle to obtain the president's tax returns if necessary.