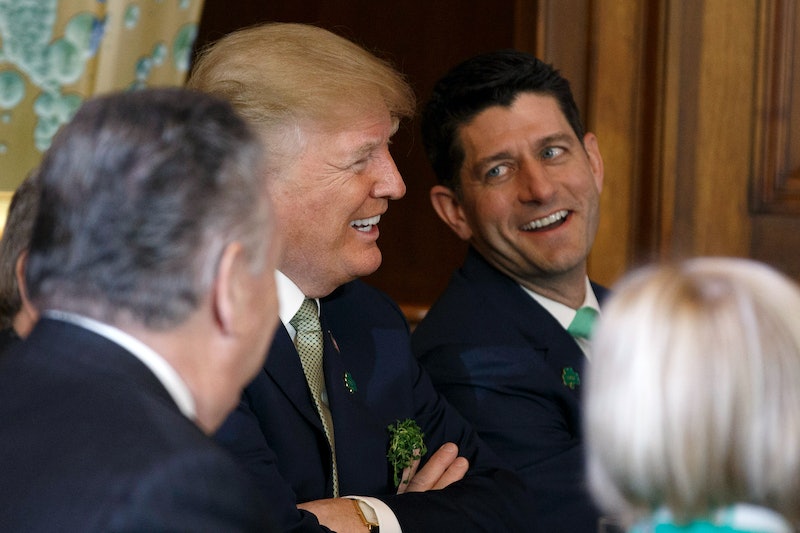 When Republicans were working on one of their many unsuccessful efforts to repeal Obamacare in 2017, President Trump grew frustrated with GOP leadership in Congress, and reportedly began derisively referring to Speaker of the House Paul Ryan as a "boy scout." It was intended as an insult, but at the time, Ryan thought Trump's nickname for him was a compliment, the speaker told the New York Times on Tuesday.

Politico reported in September 2017 that Trump found Ryan to be "dry," and had started referring to him as a "boy scout" to his staff. Ryan told the Times that he "thought it was a compliment" — until the GOP-controlled Congress successfully passed some Trump-supported bills. After that, Ryan, says, Trump told him that he'd stop calling him "boy scout."

“So I guess he meant it as an insult all along,” Ryan told the Times. “I didn’t realize.”

Trump, of course, has given many nicknames to many different political figures during his short political career. On very rare occasion, those nicknames are intended as compliments — but usually, they are not.

Trump and Ryan have had a touch-and-go relationship ever since the campaign. After Trump became the presumptive Republican nominee, Ryan initially refused to endorse him, and accused him of making "the textbook definition of a racist comment" earlier in the year. Although Ryan eventually did endorse him, Trump was still mocking Ryan less than a month before the election as "a man who doesn't know how to win."

However, Ryan has more or less fallen in line since Trump was elected, dutifully ushering the president's big-ticket policy items through the House of Representatives. After initially falling short on votes, Ryan ultimately convinced House Republicans to pass an Obamacare repeal bill, although that legislation died in the Senate. Later, Ryan shepherded Trump's regressive and unpopular tax bill through the House; unlike health care repeal, that bill passed the Senate and became law.

Nevertheless, Ryan announced in April that he won't be running for reelection in November, telling reporters that he wanted to spend more time with his children. It's worth noting that Ryan only accepted the Speakership reluctantly, and under great pressure from Republicans, in 2015, after the retirement of former speaker John Boehner left a leadership vacuum in the House GOP; Republican Rep. Tom Rooney told the Times that Ryan "made a deal with the devil to become speaker," although he didn't elaborate on this.

During Ryan's time as speaker, many of Trump's opponents have criticized him for refusing to provide any counterbalance to Trump's most odious tendencies, such as his flirtation with white supremacists. During his Times interview, Ryan rejected this argument, and claimed that in fact, he's helped prevent things from getting worse under Trump than they otherwise may have been.