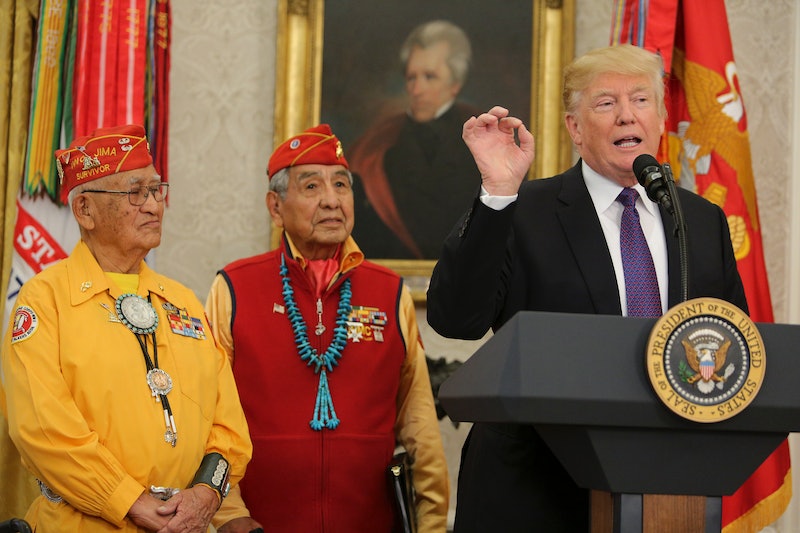 During a meeting with a group of Navajo Code Talkers on Monday, President Trump reprised his terrible nickname for Elizabeth Warren, "Pocahontas," which he periodically uses to mock the fact that she claims to have Delaware Indian and Cherokee heritage. This instance was especially offensive, since he did it in front of a group of elderly Native veterans who served the country by encrypting messages during the Second World War. But it was only the latest time he's made the jab — and it was also just the most recent of a lifetime of insults he's directed towards Native Americans.

You're very, very special people. You were here long before any of us were here. Although we have a representative in Congress who they say was here a long time ago. They call her Pocahontas. But you know what. I like you. Because you are special.

But his offenses aren't all words, of course. Trump approved the Dakota Access Pipeline, which is now operational on top of Native lands; supports Obamacare repeal, which would hurt tribal health care; is trying to build a border wall that would go through sovereign Native land; and took down a section about Native Americans from the White House website. But he's also launched plenty of verbal attacks: Here are some of those.

Trump's been labeling Warren "Pocahontas" since he was a presidential candidate. "She’s got about as much Indian blood as I have," he told The New York Times in 2016. "Her whole life was based on a fraud. She got into Harvard and all that because she said she was a minority." (The Washington Post fact-checked this claim, which haunted Warren during her 2012 campaign for Senate, and found no evidence that she had alluded to her alleged Native American heritage while applying to school or jobs.)

In 1993, Trump had invested in East Coast casinos that became threatened by competing Native American casinos. He responded by lobbying against those casinos, arguing that they hosted massive organized crime. He engaged in an abhorrent disinformation campaign, even claiming that those who ran the businesses weren't "real" Native Americans at all.

"I think I might have more Indian blood than a lot of the so-called Indians that are trying to open up the reservations," he said in a radio interview. "I think if you’ve ever been up there, you would truly say that these are not Indians." Trump suggested the same thing while lobbying in court.

In a 2011 Forbes interview, Trump defended the way he'd lobbied against the casinos nearly two decades earlier, even claiming that a 60 Minutes piece had since vindicated him.

What's happened with the Indian reservations is absolutely unbelievable. The lobbyists have done an unbelievable job. Many of them aren't Indians, you know. ... And I'm sitting here, with a roomful of people, that looked just like you, Steve, and just like me. And they have less Indian blood, maybe, than we do, okay? And they're running reservations, and I'm saying to myself, 'They don't look like Indians,' and I didn't relent. And then, at the end of the 60 Minutes piece, the conclusion was that Trump is right.

In 2000, Trump funded a series of advertisements associating Native Americans with drugs, crime, divorce, violence, and bankruptcy. The ads showed up on TV, the radio, and in print, and were meant to discourage the state of New York from allowing new Native-owned casinos to be built in the Catskill Mountains (Trump, again, saw this as a business threat).

"Are these the neighbors we want?" one ad asked, showing piles of syringes and cocaine.

Trump funded the ads in secret. He was later fined $250,000 and forced to apologize. "The apology is meant to clarify for anyone who might have been misled,” said Trump's attorney at the time, Ed Wallace. “No one is apologizing for the content of the ads. There is no apology for the sentiment of opposing Indian gaming in the Catskills.”

Way back when Trump was still immersed in the Republican primary, he advocated against the idea that the Redskins football team should adopt a less offensive title. According to The New York Times, he said in a 2015 interview that backlash against the name was overly politically correct and he claimed to know Native Americans who appreciated it.

"I know Indians that are extremely proud of that name," he said. "They think it’s a positive."

The Power Of The Unsaid: Leaving Native Americans Out Of His Columbus Day Statement

In a departure from some recent presidents, including President Obama, Trump declined to mention Native Americans in his statement on "Columbus Day" (or, as it's now known in some places, "Indigenous Peoples Day").

The White House's official statement called Christopher Columbus "a skilled navigator and man of faith, whose courageous feat brought together continents and has inspired countless others to pursue their dreams and convictions — even in the face of extreme doubt and tremendous adversity."

Trump even found space in the statement to "take this opportunity to reaffirm our close ties to Columbus's country of birth, Italy," but couldn't spare a word for the millions of Native Americans who were killed and exploited when the area was colonized in the years following Columbus' journey.

Despite the fact that he'd called her "Pocahontas" many times before, Warren was still surprised when Trump used the jab at the Navajo Code Talkers ceremony. "I really couldn't believe it," she told CNN. Thankfully, Trump's long history of disparaging Native Americans hasn't yet normalized new attacks when they come.