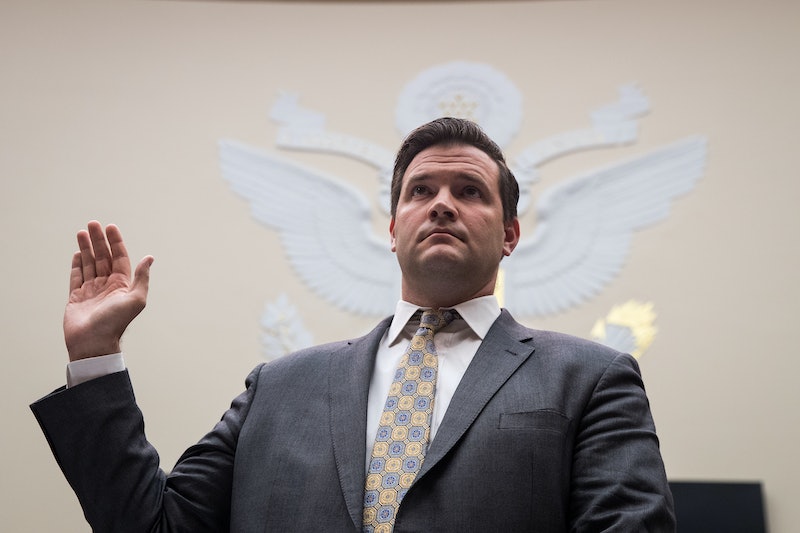 After months of calls from activists for his removal, Trump's refugee office head Scott Lloyd has been reassigned, according to Politico. The Department of Health and Human Services (HHS) Public Affairs Office reported that Lloyd will be a senior adviser at the department's Center for Faith and Opportunity Initiatives.

In March 2017, Lloyd began his stint as the director of the Office of Refugee Resettlement with HHS. During his first month on the job, he instituted a policy that allowed shelters charged with caring for undocumented minors to "wield an unconstitutional veto power over unaccompanied immigrant minors’ access to abortion," according to court documents filed by the American Civil Liberties Union.

As the director of the Office of Refugee Resettlement, Lloyd was a leading figure in the battle to deny a 17-year-old undocumented girl an abortion while she was in federal custody. Following a legal battle that took Jane Doe (the anonymous name used for the 17-year-old in court filings) to U.S. Court of Appeals for the District of Columbia Circuit, she was finally able to obtain an abortion.

How the department — which is charged with caring for migrant minors in federal custody — handled this summer's migrant crisis is under review, according to Politico. It's unclear how long the reported review will take.

Politico reported that the HHS insisted Lloyd's anti-abortion beliefs did not influence his work as the head of the refugee program. Even so, he is in the midst of drafting an anti-abortion book, according to Politico.

Politico reported that Lloyd hadn't been in the position since the summer after his office's mismanagement of the separated children during the Trump administration's zero-tolerance policy that separated children from parents at the border.

The news was first reported by The Daily Caller. "While I have valued my time at the Office of Refugee Resettlement, I am excited to take on this new challenge. I am grateful to Assistant Secretary Johnson and the incredible people at ORR and the Administration for Children and Families, and I am proud of what we have accomplished together. I thank Secretary Azar for this new opportunity," Lloyd told the conservative media outlet in a statement on Monday.

"The damage Scott Lloyd inflicted on the people he was charged to protect, and to the agency itself, will not be easily erased," Brigitte Amiri, deputy director of the ACLU’s Reproductive Freedom Project, told Politico when Lloyd's reassignment was announced.

Lloyd's career has followed the intersection of the law and Christianity. The Washington Post reported that Lloyd went to the Catholic University of America's Columbus School of Law. The newspaper reported that after graduation, Lloyd worked for a group that provides legal representation that is faithful to the Catholic Church's teachings called LegalWorks Apostolate.

Early in his career, Lloyd was an attorney for the George W. Bush administration's HHS. He co-wrote a "conscience" rule that allowed medical providers to say they won't provide contraceptives, abortion, or other reproductive career because of moral objections, according to The Washington Post. This rule was later rescinded by President Barack Obama in 2011.