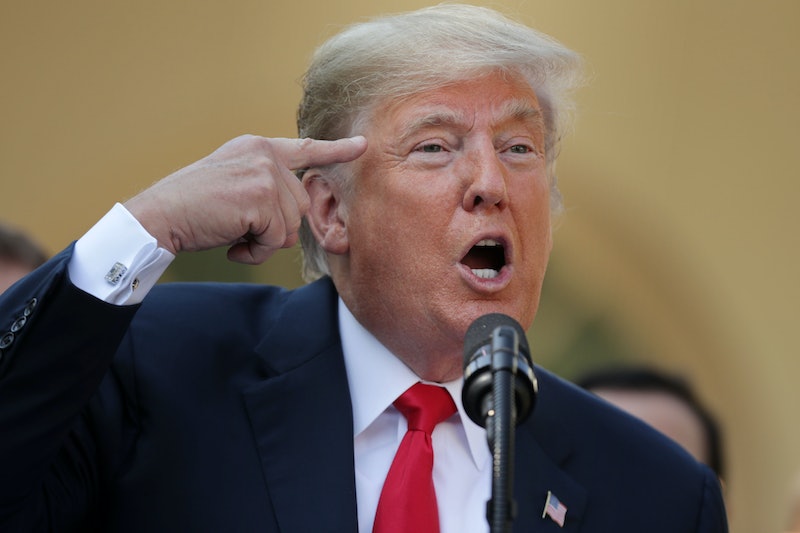 One of President Donald Trump's most repeated promises is that he'll always put America first. No matter how you think that promise is working in the United States, it seems to have had a significant effect abroad. According to a new survey, Trump's reputation with foreigners is worse than Vladimir Putin's. Foreigners have a low opinion of Trump almost across the board — with just a couple of notable exceptions.

Only 27 percent of the more than 26,000 foreigners that Pew Research Center spoke to for a new survey released on Monday on America's international image reported having confidence in Trump. Pew included people from 25 countries, and there were only three countries whose inhabitants reported being more confident in Trump than they were in President Barack Obama: Russia, Kenya, and Israel. In most of the countries — and particularly in Latin America and Europe, The New York Times notes — opinions of the United States have dropped significantly.

One region where Trump is particularly unpopular is the European Union, according to Pew, where confidence in the American president experienced a significant drop-off after the end of Obama's presidency. Pew did note, though, that Trump is more popular among supporters of European right-wing parties, like the United Kingdom Independence Party (UKIP). Among the European Union countries polled, he has significantly more support in Poland and Hungary than other nations; both are currently governed by leaders who are pushing the countries toward authoritarianism, as Foreign Policy reports.

Generally, this survey reflects negative views of the more authoritarian leaders. German Chancellor Angela Merkel and French President Emmanuel Macron have confidence ratings of 52 and 46 percent, respectively, whereas the less democratic leaders asked about — Xi Jinping of China and Putin of Russia — came in at 34 and 30 percent, respectively. Trump rounds out the bottom at 27 percent.

This poll more or less matches anecdotal evidence about foreigners' thoughts on Trump and Trump's America.

"The United States is burning through unbelievable amounts of good will. You can do better," a Swedish citizen named Oscar told The New York Times, when asked about how international readers were viewing Supreme Court nominee Brett Kavanaugh's confirmation process.

"I don’t think people in the U.S. know how closely we are watching this, and I didn’t know, until now, how deeply [Christine Blasey Ford's] testimony would affect me personally," said a Belgian New York Times reader identified only as P. "We have been watching the downfall of the American democracy for a while now."

The Pew survey did show that the majority of countries still hold a positive view of the United States — so people across the world can at least separate their views of Trump from their views of the country as a whole.