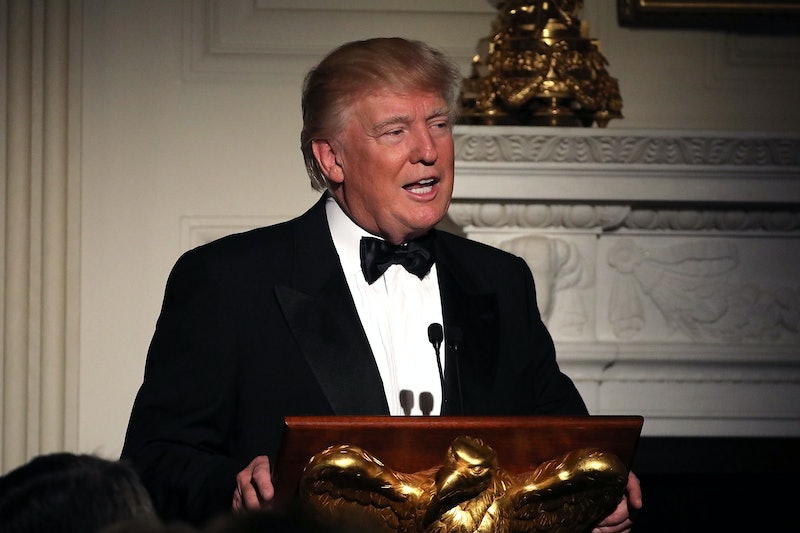 On Sunday evening, the President and First Lady hosted the Governors' Ball, an annual event at the White House attended by United States governors. Unfortunately, President Donald Trump's sexist remarks at the Governors' Ball, in which he greeted governors and their "wives" and "daughters" — seemingly ignoring the fact that women also serve as governors — were unacceptable and did not set a promising tone to begin the evening.

In his opening statement, Trump praised and welcomed what he said were 46 U.S. governors in attendance by saying, "I just want to salute and toast the great governors of the United States ... your families and wives and everyone’s here. I've seen daughters come tonight, I’ve seen wives, all I know is everyone’s lovely and we're going to have a wonderful evening."

While perhaps well-intentioned in terms of seeking to welcome family members to the evening's festivities, Trump's specific focus on governors' wives and daughters gave the impression that governors are only male, neglecting to acknowledge the fact that there have been (and currently are) women who have served as governors in the United States — though certainly not enough.

Indeed, throughout U.S. history, 40 women have served as the top executive in U.S. states and territories, as well in the role of Mayor of Washington, D.C. Presently, four women are serving as U.S. governors: Mary Fallin of Oklahoma; Gina Raimondo of Rhode Island; Susana Martinez of New Mexico; and Kate Brown of Oregon. Muriel Bowser is also currently serving as the mayor of the District of Columbia. Trump's apparent refusal to acknowledge the women in gubernatorial leadership is incredibly disappointing and regressive.

Overall, while Trump's comments at the Governors' Ball may have not been intentionally sexist, they reflected a great deal of negligence and unfortunately just further help perpetuate sexism toward women in politics. Men in leadership roles must actively seek to ensure that women (and other underrepresented groups) are included, both in language and action. While perhaps some may think it is somewhat trivial to focus so much on Trump's choice of words, rhetoric is incredibly powerful and can either help perpetuate or diminish sexism and discrimination.

By not choosing to actively acknowledge in his remarks that people of all genders are governors who have wives and husbands and partners (and daughters and sons), Trump is implicitly contributing to the sexist paradigm that only men serve as politicians. This is unacceptable rhetoric for the chief executive of the United States, both in itself and in light of the fact that there are women serving as U.S. governors, whose service was seemingly not even acknowledged at the Ball. It would serve Trump well to be much more careful with his choice of words and much more inclusive in his remarks at future events.